SHIN GALLERY is pleased to present, De Forma, a group exhibition featuring works by Gotthard Graubner, Gerrit Rietveld, Isamu Noguchi, and Ted Stamm. Utilizing paintings and furniture, the exhibition pairs design with visual art to question the formation of shapes and their metaphorical significance as a means of artistic expression. Gotthard Graubner experiments with color and space to formulate his “cushion paintings,” creating a gravitational pull for the viewer, while Ted Stamm integrates hard edge geometric drawings to illustrate monochromatic and conceptual forms. Gerrit Rietveld and Isamu Noguchi juxtapose the visual artworks with minimalist and organic design, creating accessible objects through geometric compositions. The creation of the works range from 1955 to 1984 and are curated with the intent to embrace shape, color, and space. De Forma enables the viewer to encounter a variety of artists who address an alternate perspective on the function of forms in relation to their spatial surroundings. The exhibition will be on view from January 11th through February 24th.

Gotthard Graubner
Gotthard Graubner (b. 1930) was a German contemporary artist known for his painted cushions and exploration on the anatomy of colors. His philosophical outlook on shape and form created a new technique for artistic expression. Colors are a constant motif in Graubner’s that is everchanging. Throughout the years of his practice, Graubner moved away from the flat water-colored surfaces to a three-dimensional design accentuating color. In his early work Farbkissen (color pillow) and Farbkorper (color bodies), Graubner crossed boundaries by composing two-dimensional paintings that went beyond the flat surface, stretching the canvas over foam and perlon constructing body like forms. Gotthard Graubner was born in Erlbach, in Saxony Germany. In 1947-48 he studied at the Berlin Academy of Arts before transferring to the Dresden Art Academy of Fine Arts, where he studied until 1952. Soon migrating west of Germany, Graubner preceded his practices at Düsseldorf Academy of Arts right before pursuing his career as an art educator. Gotthard Graubner died in Neuss, Germany in 2013.

Gerrit Rietveld
Gerrit Rietveld (1888-1920) was a Dutch furniture designer and architect whose goal was to produce products accessible for the individual. As an advocate of De Stijl style, Rietveld learned to master geometric shapes as well as limit his use of color to primary colors, black and white. In 1917, Rietveld opened a furniture factory in Utrecht, while studying architecture. Soon after joining the De Stijl movement, artist’s Theo Van Doesburg, Piet Mondrian, and Bart van der Leck suggested Rietveld use more color in his work. Influenced by the artists, Rietveld produced one of his most iconic pieces in 1918 known as the Red and Blue Chair. Soon after Rietveld’s career skyrocketed, propelling him to design the infamous Schröder House in Utrecht in 1924. The design was specifically constructed for Truus Schröder, a widow searching for an accessible home for her children. When presented with the sketches of the house, Schröder suggested he remove the walls. Doing so, he invented an architectural primary design, creating an infinite amount of space, successfully incorporating De Stijl principles. Rietveld rejected conventional furnishings making pieces that were nearly transparent. He turned ordinary objects into extraordinary abstractive compositions. Before his death he began working on his biggest project in Amsterdam, the Van Gough Museum. However, it wasn’t completed until 1964, years after his death.

Isamu Noguchi
Isamu Noguchi (b. 1904) was a Japanese American artist known for being as one of the most influential designers of the 20th century. Born in Los Angles, California Isamu was the son of an Irish-American mother and a Japanese father who were both writers. In 1906, Noguchi and his family moved to Japan from Los Angeles, California where his mother later decided to send him to La Porte, Indiana to attend boarding school to further his education. Shortly after high school, he became an apprentice to sculptor, Gutzon Borglum, who believed Noguchi did not have the talent to succeed as an artist. Devasted by the disapproval of his mentor, Noguchi neglected his passion for art for some time. In 1923, he decided to become a premedical student, enrolling at Columbia University in New York City. Recognizing medicine was not his true passion, he transferred into the Leonardo da Vinci Art School where his talents were soon recognized. After transferring to East Side Art School in New York City, Noguchi won a scholarship to Paris where he worked as a studio assistant for abstract artist Constantin Brancusi. During his time in Paris, Noguchi was introduced to Alexander Calder and Alberto Giacometti, where he gained an appreciation for abstract art, discovering new representations of form and shape. Grateful to be in Paris during the 1920s, he was able to whiteness the emergence of Surrealism. The movement greatly influenced Noguchi’s work, and was a way to interpret imagery stemming from dreams during a state of unconsciousness. In the 1930’s Noguchi began to expand his practice, experimenting with sculptures, landscape architecture, and furniture. Noguchi worked with a wide range of materials, such as paper, metal, stone, wood, and earthenware. As he states in this quote, “Everything is a sculpture. Any material, any idea with hindrance born into space, I consider sculpture.” Embracing all objects, Noguchi managed to turn common materials into art, developing new shapes and forms. In 1985, Isamu Noguchi opened The Isamu Noguchi Foundation and Garden Museum located in Long Island City, NY. Shortly after, Noguchi passed on December 30, 1988, in New York City. Today, Noguchi’s work can be found in several museums across the nation, including The Museum of Modern Art in New York, the Art Institute of Chicago, and the Courtauld Institute of Art in London.

Ted Stamm
Ted Stamm (1944-1984) was a Brooklyn-born artist often known for his geometric formations, consisting of triangles overlapping rectangles. Stamm attended Hofstra University where he obtained his B.F.A. During his years of enrollment Stamm studied graphic design, painting, and printmaking. Within his years in education, Stamm was able to study with Perle Fine, John Hopkins, and Richard Pugliese. Soon after graduating, Stamm moved to Soho, New York where his career took off. From 1968-1972 Stamm created various abstract paintings, in which he utilized rich colors of blue, pink, and red on canvas. Being completely unsatisfied with his work, he later returned to these paintings covering them up with black grid-like patterns. He referred to his redefined paintings as “cancel paintings.” From 1972 onward, Stamm grew fascinated with the shade of black, heavily incorporating it into every painting and drawing. He would later use this color to experiment with lines, geometric forms, and hard edges. 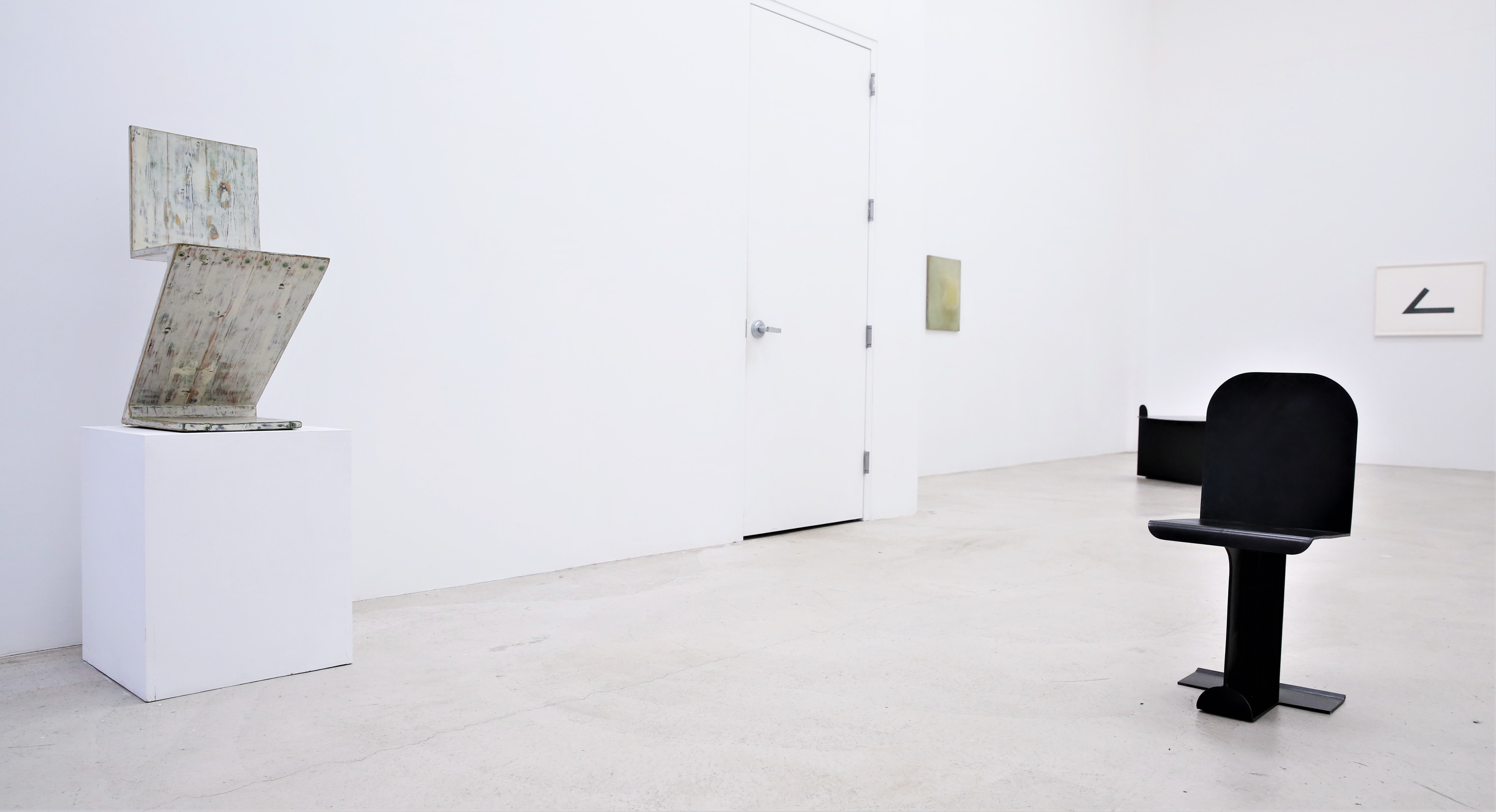 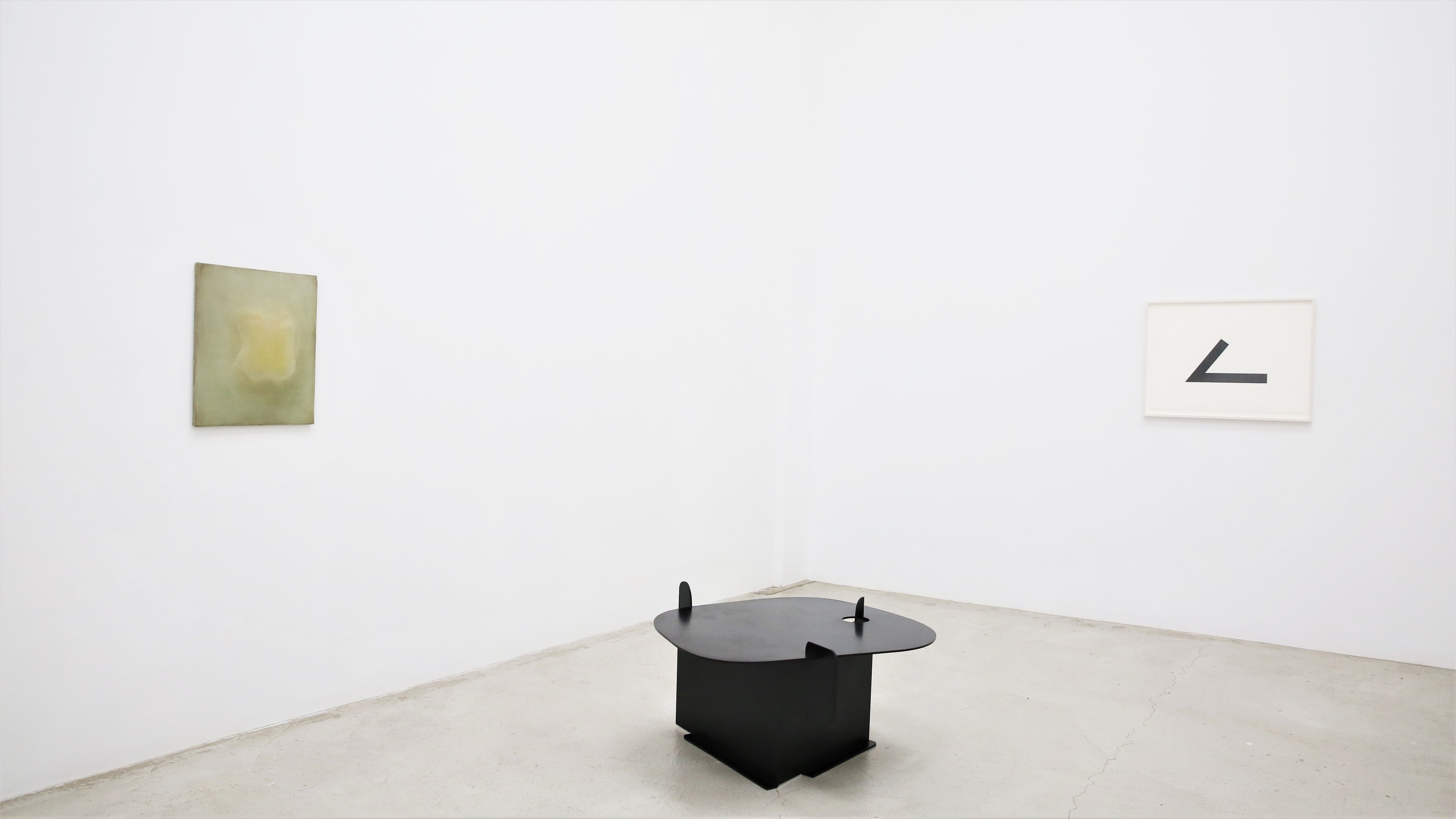 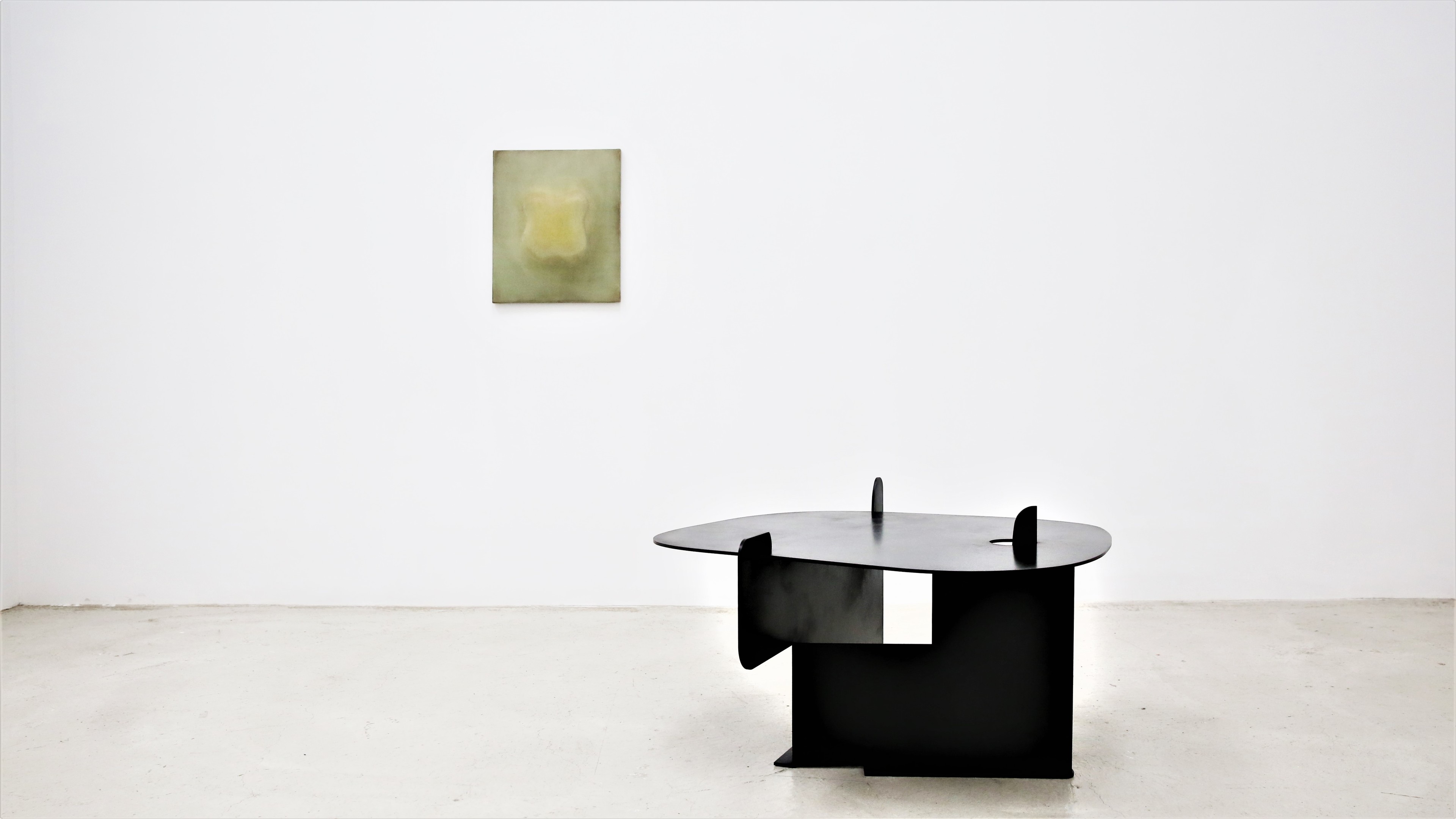 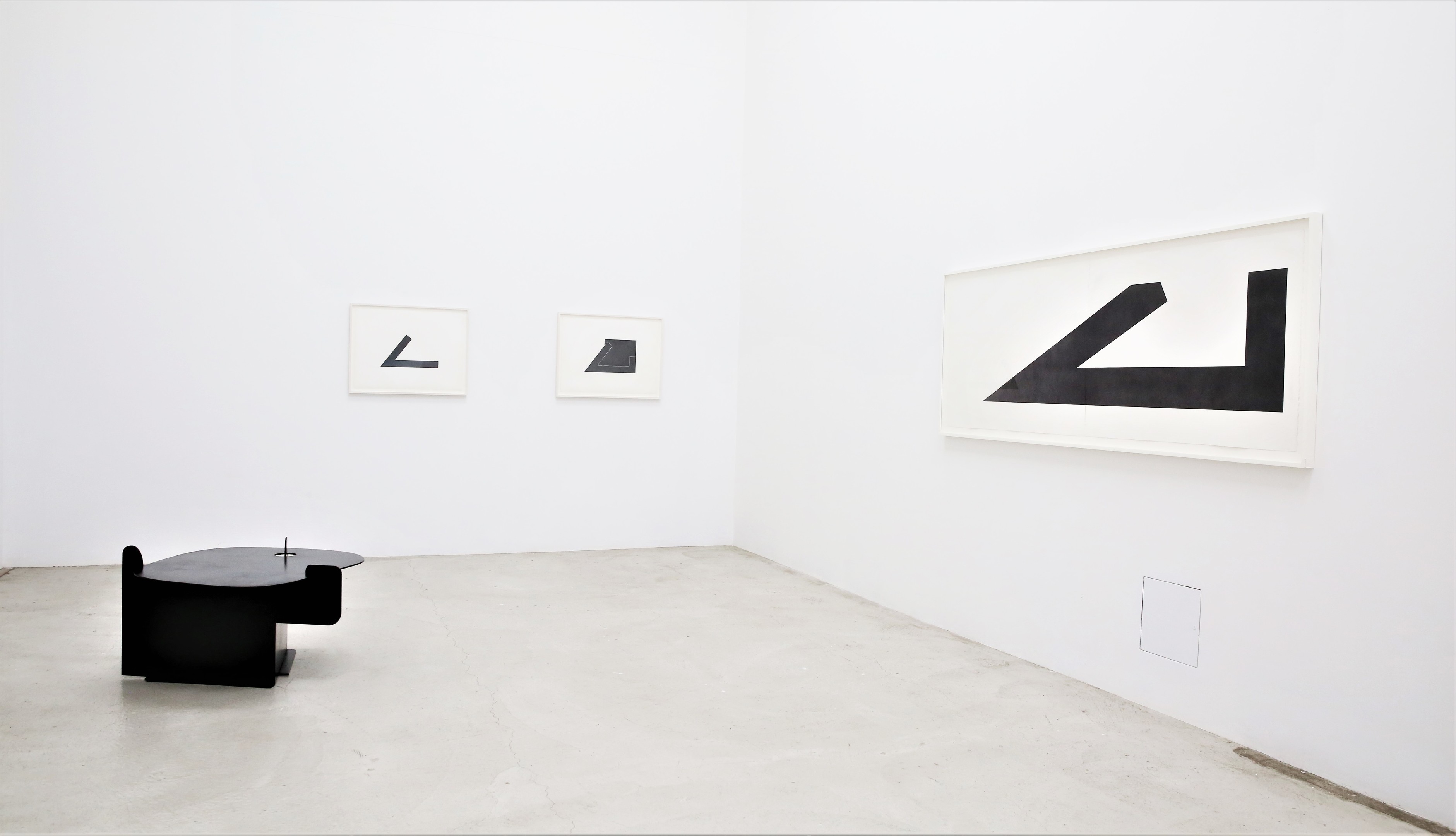 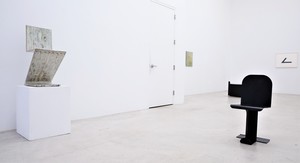 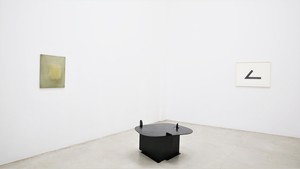 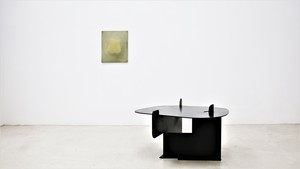 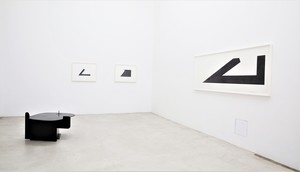