SHIN GALLERY is pleased to present a solo exhibition of paintings by Peyton Freiman. For "Another Rodeo”, Freiman left the cacophony of Brooklyn for the wide-open spaces of rural Texas, where he developed his latest body of work. Inspired by the new environment, Freiman felt the need to spread out using large scale canvases and acrylic paint, with a focus on the American West.

In this exhibition, Freiman has developed various floating shrine-like pieces projected onto a sky or astral plane. The two largest works “Spring Break Fever” and “Round and Round The Void” fuse Freiman’s interest in American pop culture, folk, and street art into the form of two “cosmic shrines”. By viewing it as a projection, Freiman was able to break down the composition as a modular, floating assortment of interchangeable pieces.

“Round and Round The Void” features no real central subject: a burning Mountain Dew sponsored NASCAR, is surrounded by other images: a man riding a horse, a Native American woman in a bikini playing a Frankenstein guitar, and a flower bouquet. These images exist apart and together to form an explosive multi-layered maximalism, urging the viewer to “spot the influence” up and down the pieces.

Freiman paints two portraits of Native Americans lifted directly from the American artist Frederic Remington’s work. Floating above the burning car, there is a portrait of the race car driver Richard Petty wearing his signature cowboy hat on a red backdrop underneath the word “Marlboro”. By inserting the cigarette manufacturer’s name in the background Freiman references Richard Prince’s original Marlboro Man work, but instead of taking the logo out as Prince does, Freiman puts it back in (out of context). A way to say that every part of American History and culture will always be translated back to a brand and sold.

“Spring Break Fever” features two reclining figures on either side of the piece, referencing the 1480 piece, "The Lamentation over the Dead Christ" by Andrea Mantegna. The pop historical figures of the cowboy and Indian surround four coeds playing chicken in a pool. Two of these figures are dead, while the other two await execution. While the coeds party in their apartment complex pool and park their cars on top of the graves of men and women they will never know. The world spins, and history, as we understand it, continues.

Freiman also employs the use of bric-a-brac into these two larger works, sewing hundreds of white plastic buttons in repetition onto the canvas. The buttons are a continuation of Freiman’s interest in folk art and the repetitive use of “junk” to form compositions and pieces. Both pieces feature several “patches”, that Freiman made by embroidering fabric with images, the torches in “Spring Break Fever” the bouquet in “Round and Round The Void”. These intricate details give the pieces a warm, hand-made quality while showing the work that was sewn into them.

Also on display are three midsize works focusing on three central figures: the guitar player, the skateboarder and the rodeo clown. Each figure, a personal reference to Freiman’s association with the west and relationship to it.

“The Last Matador” inspired Freiman to move from the more modular astral plane style into something simpler, focusing on the central figure alone. Based on the 1864 Edouard Manet painting “Dead Matador”, Freiman’s version updates Manet’s romanticized Spanish bullfighter into a modern-day, Americanized version. Here, the swashbuckling matador is replaced with a down and forever out rodeo clown, complete with one gold tooth, a pack of Luckys, and a confederate flag tattoo. Suddenly the romantic, aspirational masculinity of the original is replaced with the current-day, American deadend of manhood: a clown version inverted in on itself for hundreds of years until there is nowhere to go.

“Soloing My Way Out of This” is a reference to both the guitar solo and the solo show. Freiman paints a romanticized version of himself raising a guitar triumphantly overhead while seagulls fly around him carrying trash for their nests. He is both aware that a solo can be a beautiful thing, and that the natural world outside looks like it’s falling apart. “Another Rodeo” celebrates the flux of the past, present, and future, knowing that the story will always change depending on who is telling it, with reality always lurking in the background.

Installation view of Another Rodeo 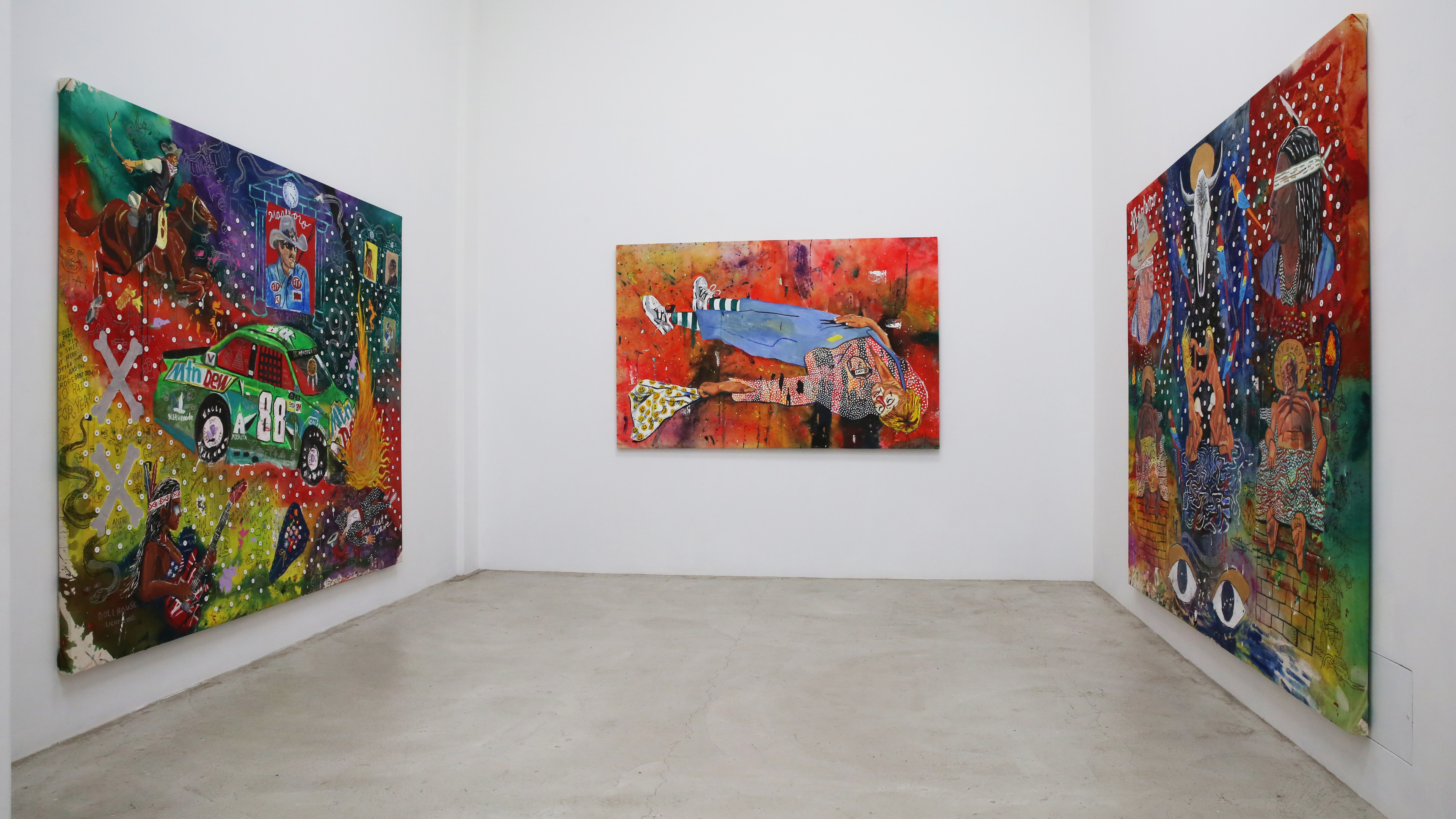 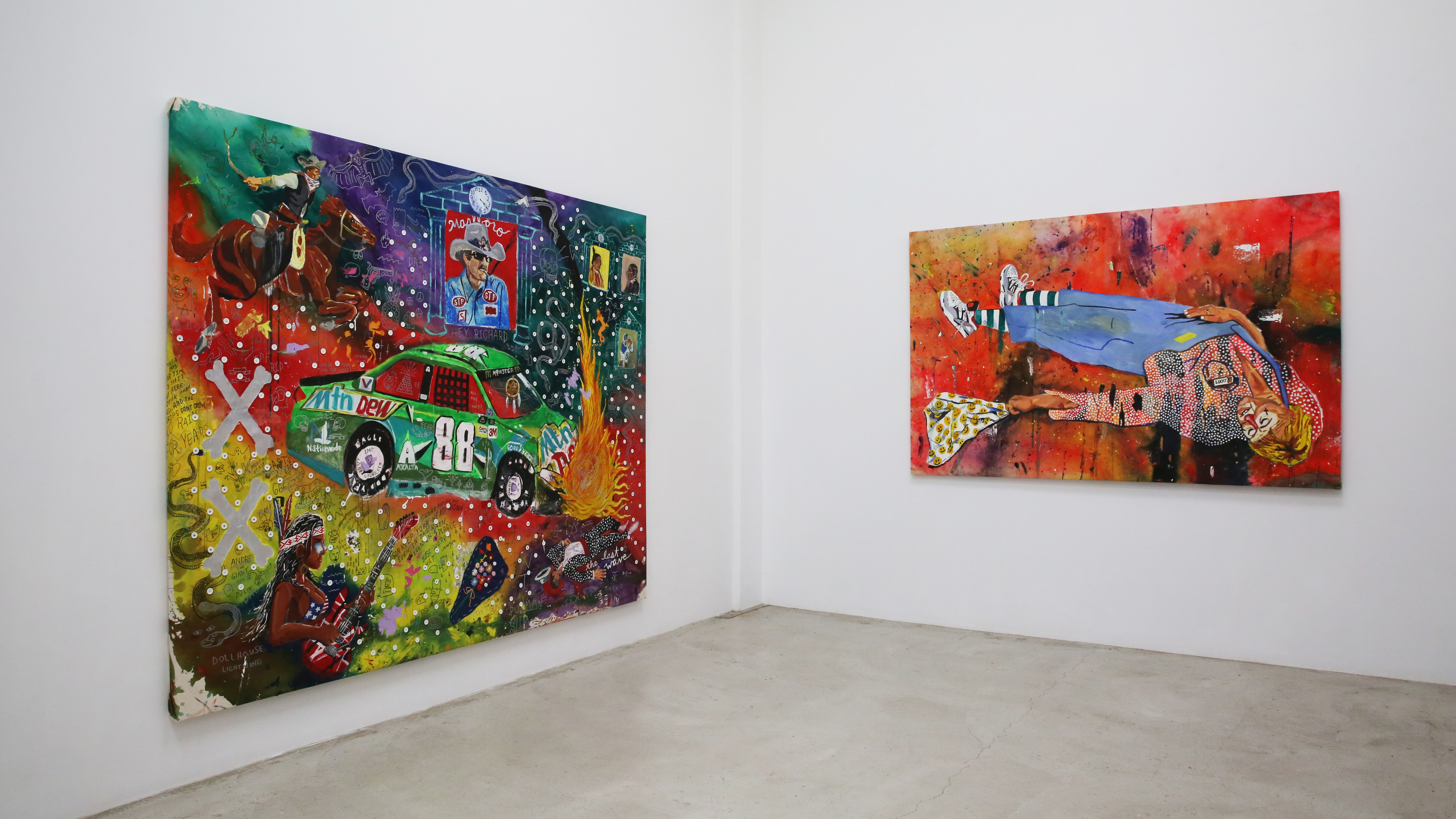 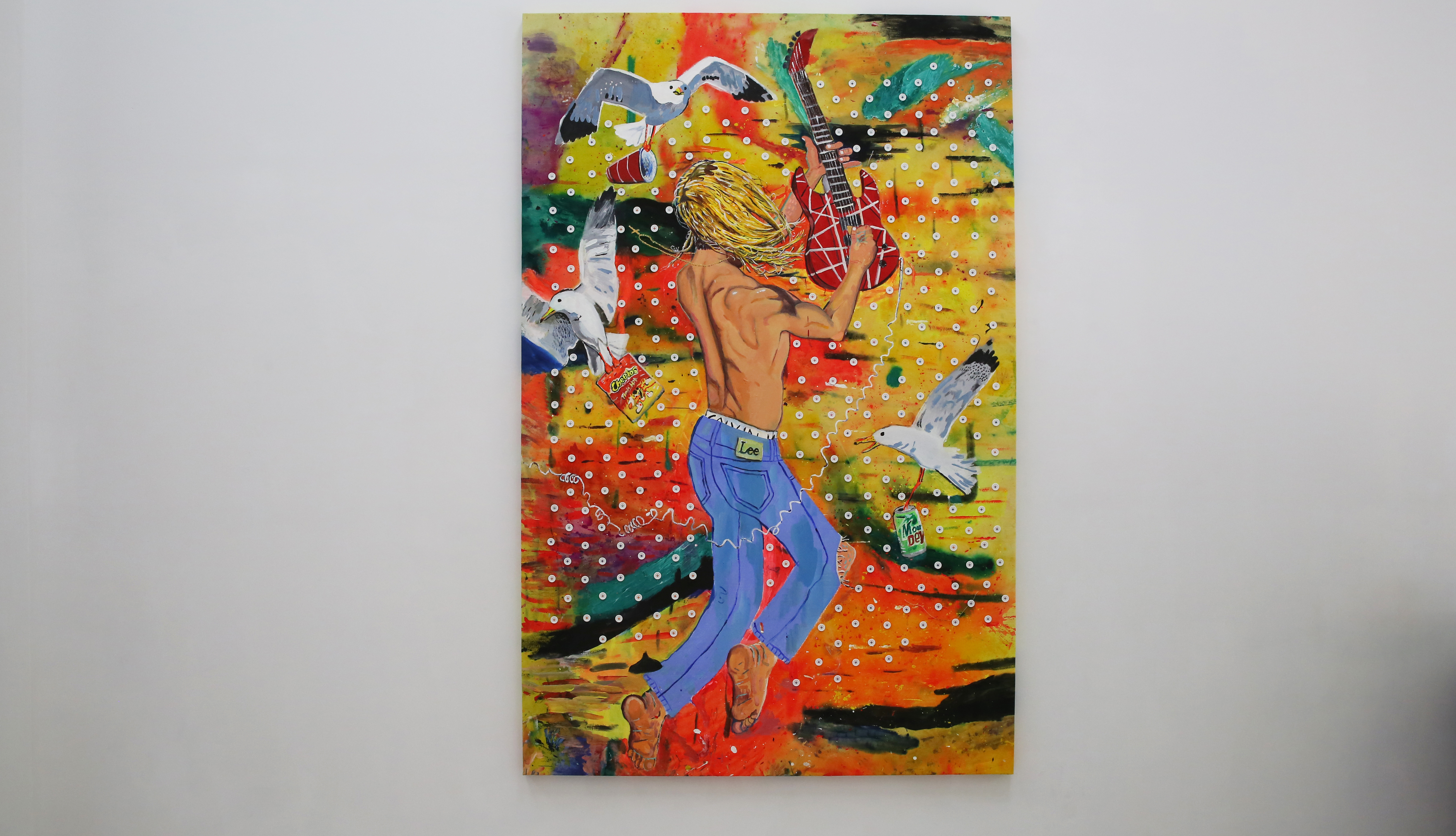 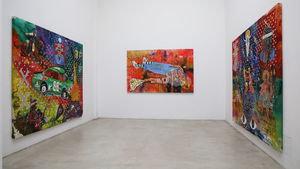 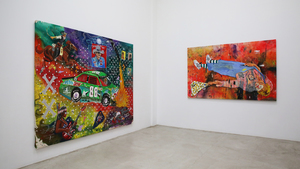 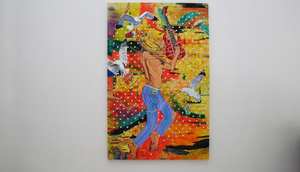 Installation view of Another Rodeo 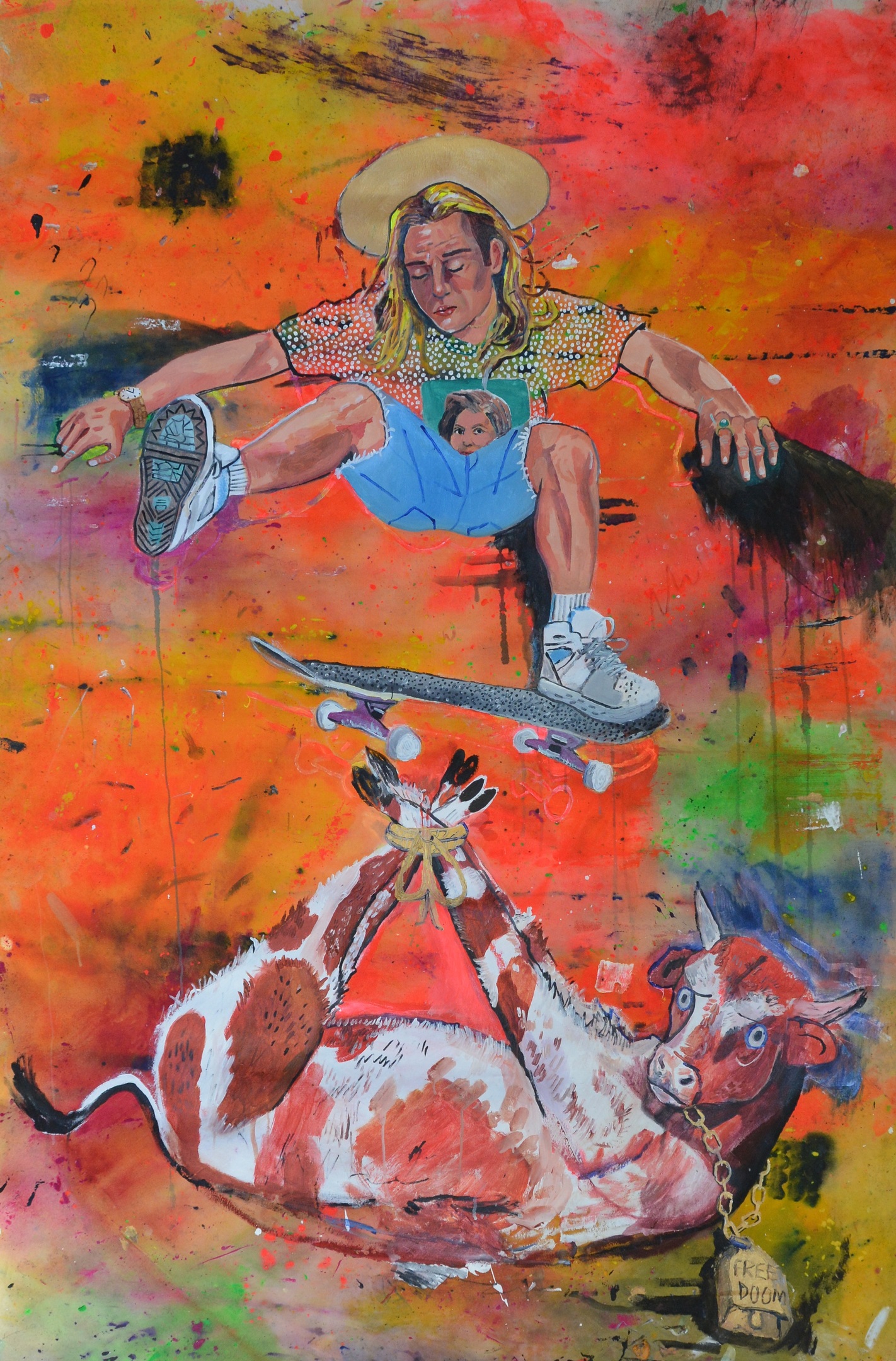 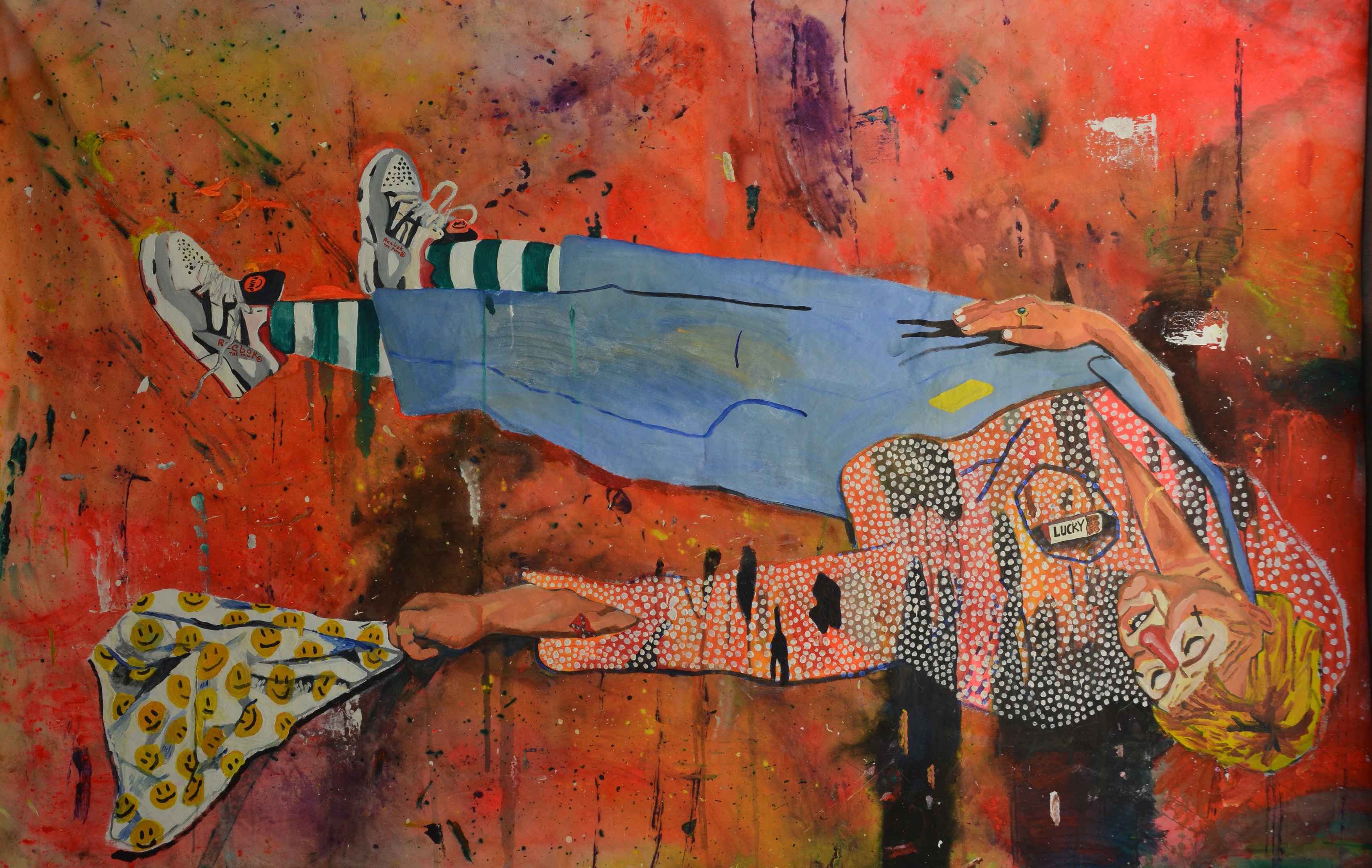 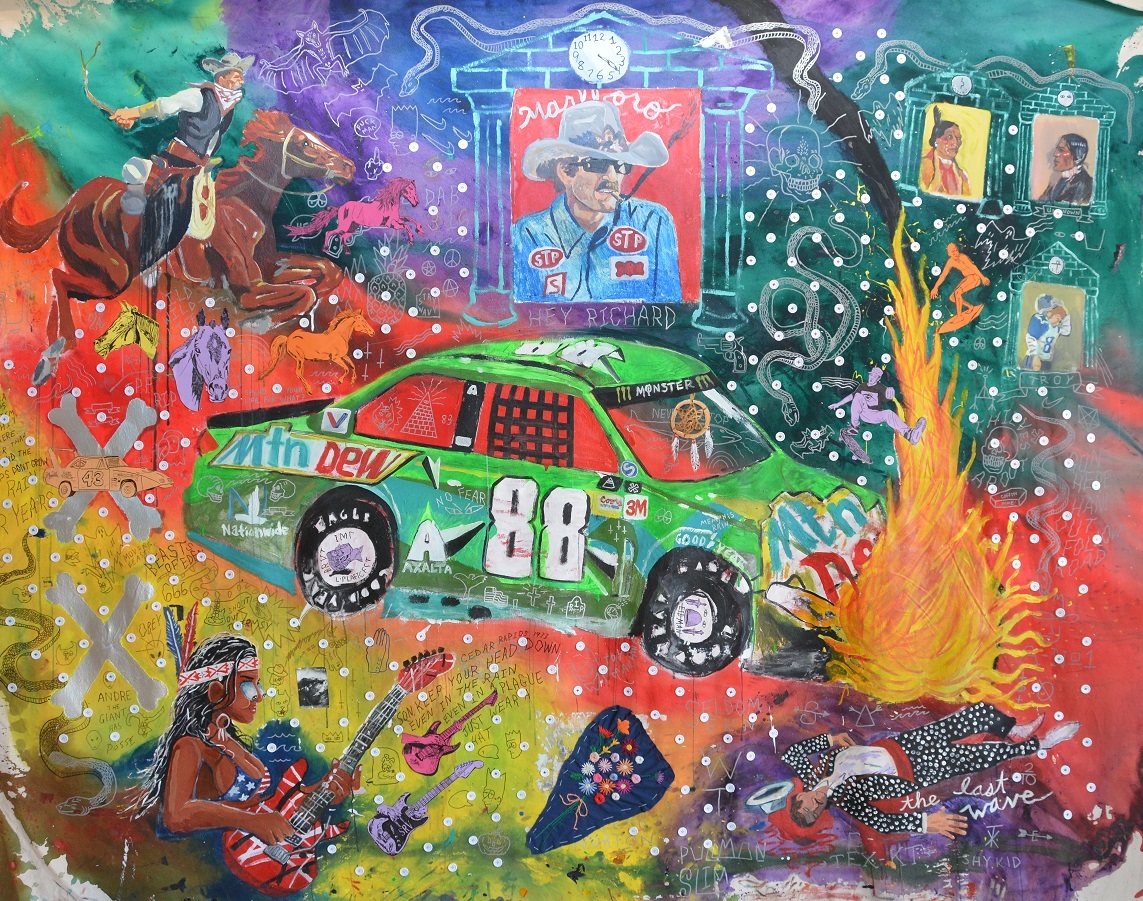 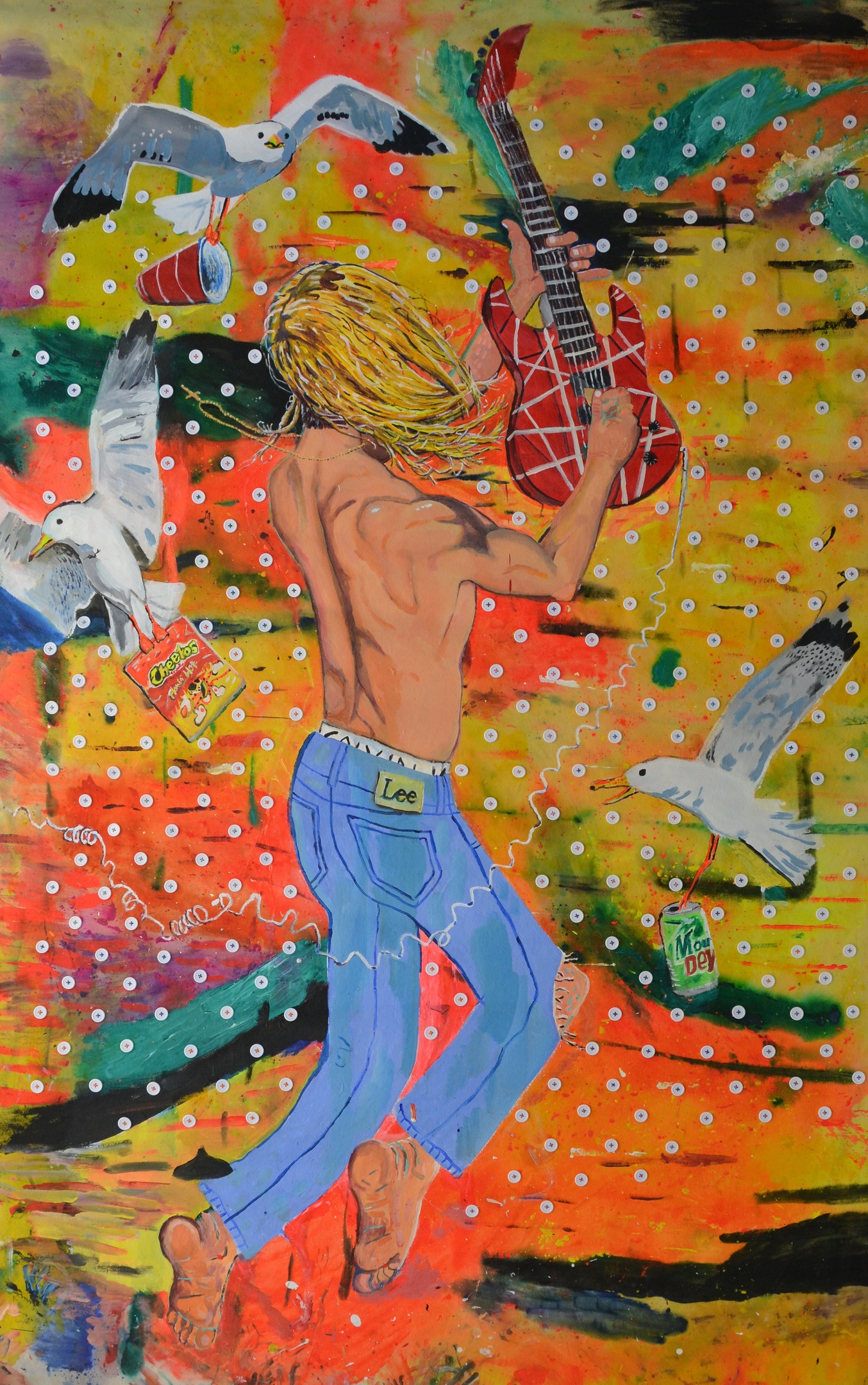 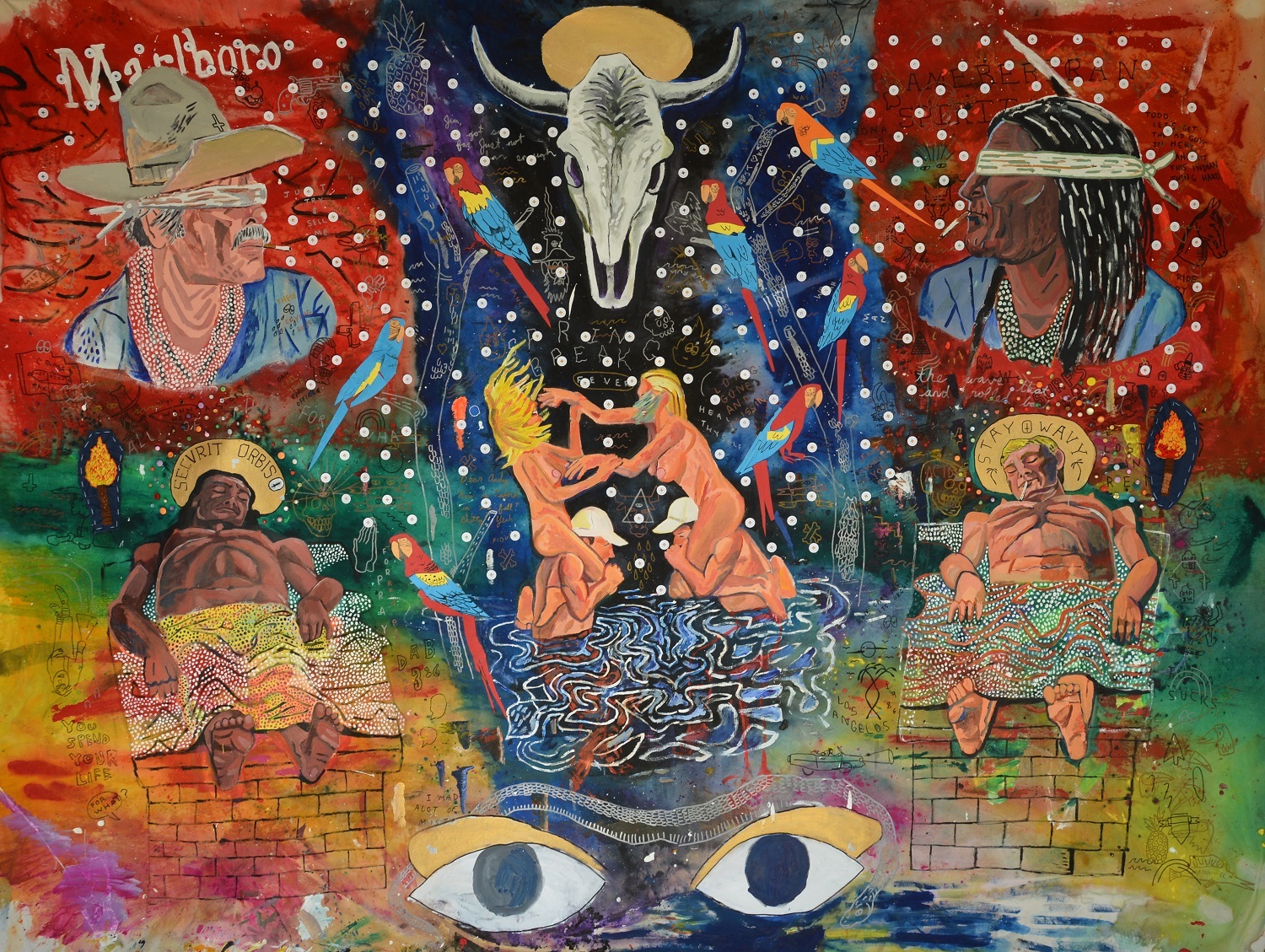 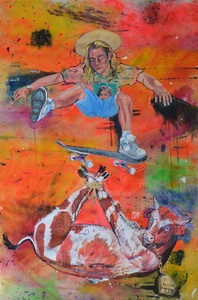 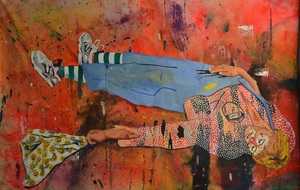 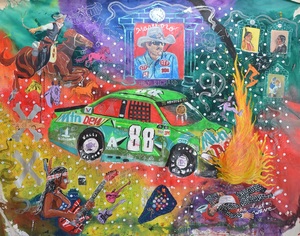 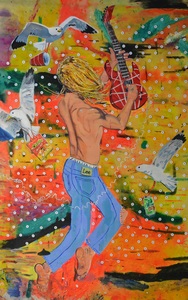 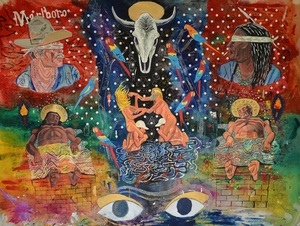