Lehmann Maupin is pleased to announce a major, double gallery exhibition of works by Light and Space artist, Helen Pashgian. The Los Angeles based artist’s first solo exhibition in Asia will span both of Lehmann Maupin’s Hong Kong and Seoul galleries and feature new work from her most notable Column, Lens, Sphere, and wall mounted sculptural series. Working during the 1960s amidst artists such as James Turrell, Robert Irwin, Larry Bell, Mary Corse, DeWain Valentine, and Peter Alexander, Pashgian has been recognized as a key figure in advancing the techniques necessary to harness the art-making potential of industrial mediums including plastic epoxies and resins. She transforms these raw materials into ethereal works that give the illusion of both containing and emanating light.

Pashgian’s primary objective is to explore light as both a medium and subject of sculpture. Originally pursuing an academic career in art history, Pashgian planned to begin her doctoral research on the 17th century Dutch masters, who were renowned for their innovative ability to paint light. By the early 1960s, she had turned her attention to art making and began working with industrial materials, experimenting with casting techniques that would allow resin to encapsulate light within a solid form. Part of a pioneering program of artists in residence at the California Institute of Technology, from 1970-71 she was among the first artists and scientists given access to numerous materials developed within the California aerospace industry that had recently become declassified. During her time in the residency program, she pushed the boundaries of her experimentation, leading her to dramatically increase the scale of her work using highly volatile polymer compounds. Decades after perfecting her material approach, Pashgian has continued to innovate and in 2006 began producing an entirely new form of molded, 2.5 meter columns, which were the focus of her Helen Pashgian: Light Invisible exhibition at the Los Angeles County Museum of Art in 2014.

Kirk Varnedoe, the famed critic and eventual chief curator of Painting and Sculpture at New York’s Museum of Modern Art, described the Light and Space movement, saying it “…pushes toward dissolution and detachment...it’s not an optical style, it’s an actual optical experience...west coast minimalism is all about ambiguity.” This notion of ambiguity, the temporal and individual experience of viewing ephemeral works, is perhaps the defining classification of Pashgian’s work. While, like her peers, she engages with the treatment of light, color, and atmosphere it is the movement of the viewer that is central to experiencing a Pashgian work. Not merely vehicles for transmitting light rays, she embeds unique shapes or prisms within each sculpture that are activated by the viewer’s movement, creating the effect of appearing and disappearing depending on one’s physical relationship to the piece. The result is thus relational in nature, with the viewer’s visual perception completing the sculpture.

This effect is evident in Pashgian’s Column works, which the artist began creating as a natural evolution of her mounted sculptures that appear to float in front of the wall. The effect, achieved using an elliptically curved edge, was the impetus and foundation for her freestanding column works. In both series, the viewer’s movement allows for the discovery of elements from certain vantage points—the reward for those curious enough to look. This effect is similar to her Sphere works that utilize some of the greatest concentrations of color that Pashgian has developed, with shades chosen based on her careful study of their light reflecting or refracting properties. These spheres, meticulously sanded and polished to create a glass-like reflection, also absorb and distort surrounding environmental imagery and light through an internal dimension that Pashgian embeds within each. Most recently, she has returned to making her Lens works, convex disks that sit atop a pedestal with a central radiating color and surface edge that appears to melt into its surroundings. The result is yet another example of the artist’s ability to merge formal mastery and the mechanisms of looking, with the pleasure and wonder that comes from observing naturally occurring light and color.

In her most intimate works, 30-centimeter square wall mounted pieces, each work appears to capture an actual instance of light filtered through the surface of water as the phenomenon might be observed from below. Reflective of her lifelong fascination with this interplay, these works, in which the artist accomplishes her most direct language, speak to the possibilities of contemplating a fleeting moment with great depth and nuance, or as she states, “touch[ ] on the mysterious, the place beyond which the eye cannot go.” This is likely the best description of her oeuvre. Just as she avoids titling her work so as not to lead the viewer to any preformulated conclusions, Pashgian has chosen a subject as universal, emotive, and fleeting as light in order to frame the world as predicated on perception and illusion—unknown but discoverable. Ultimately, her work invites us to follow our natural inclination to look closely and urges us to keep looking further. 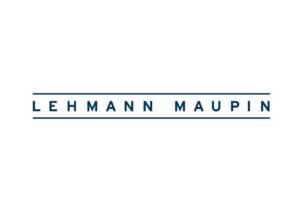 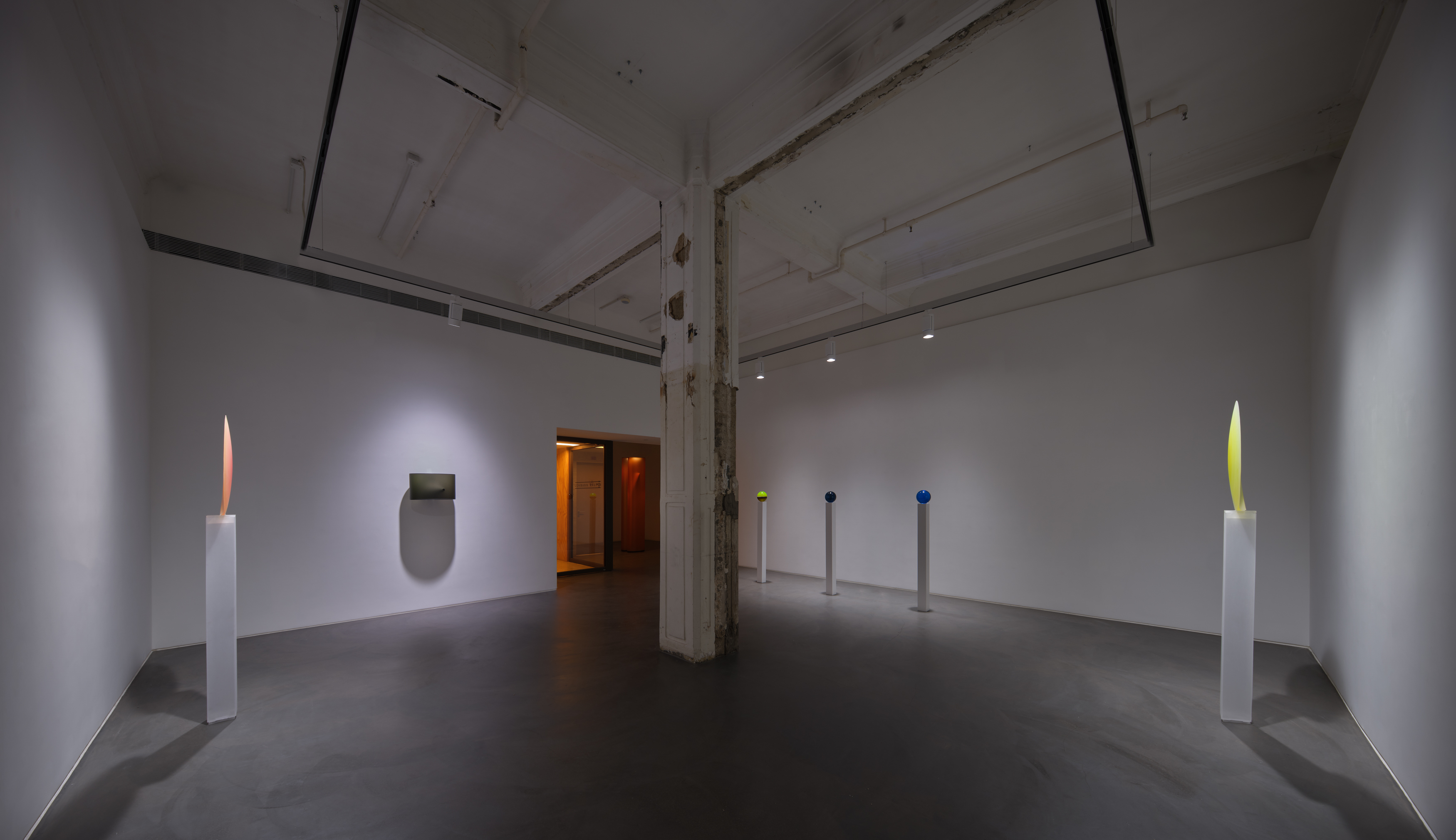 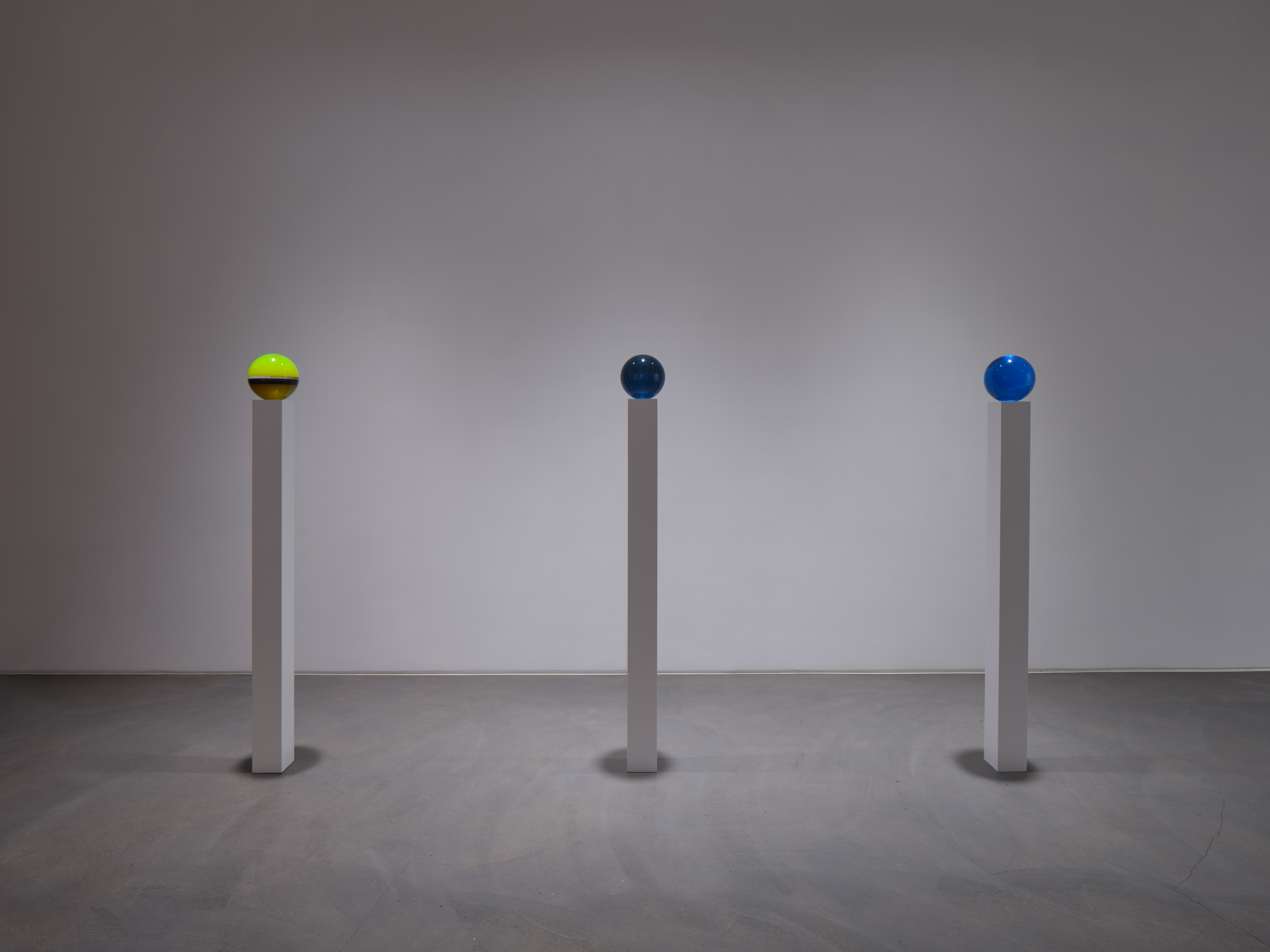 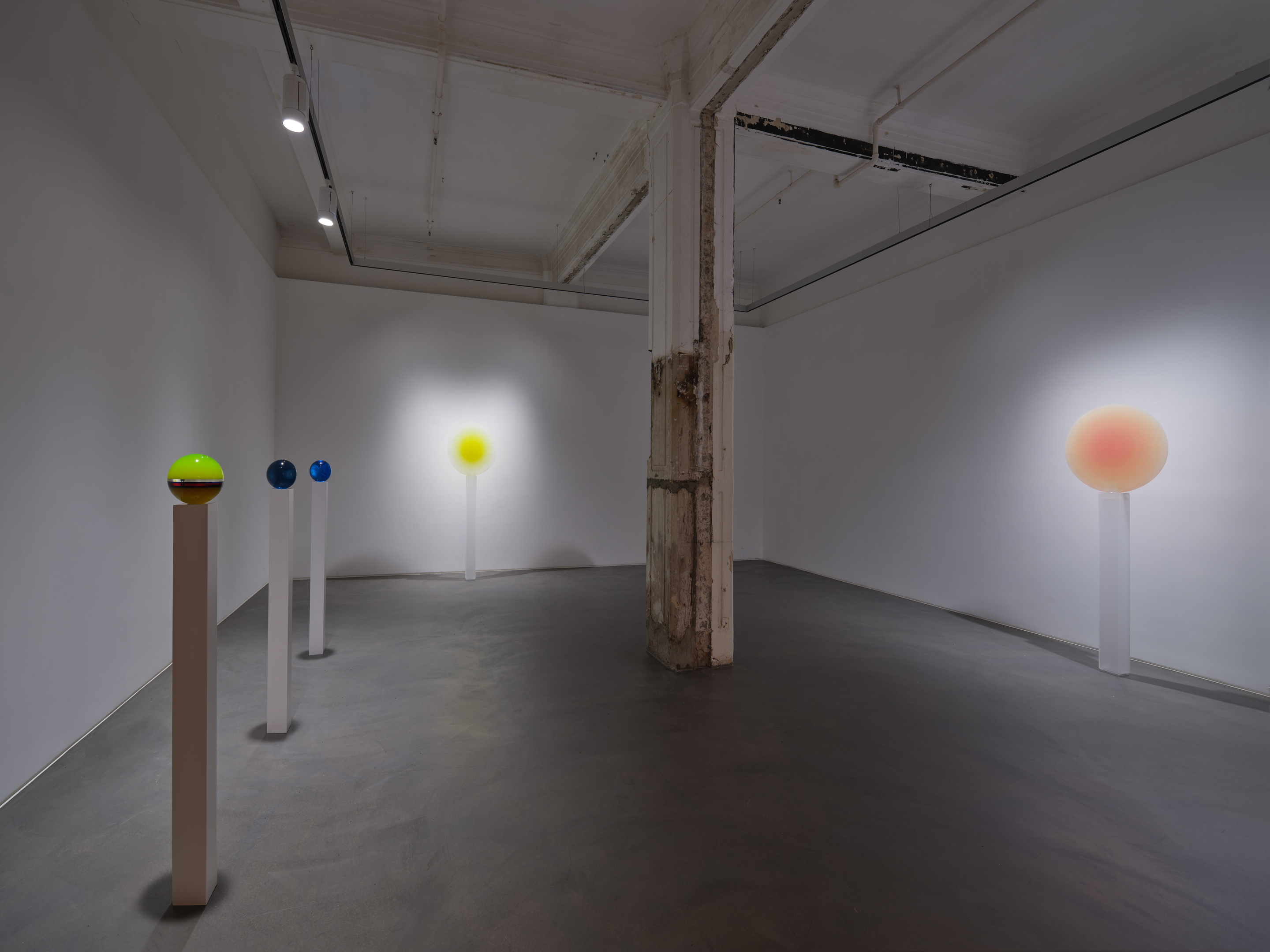 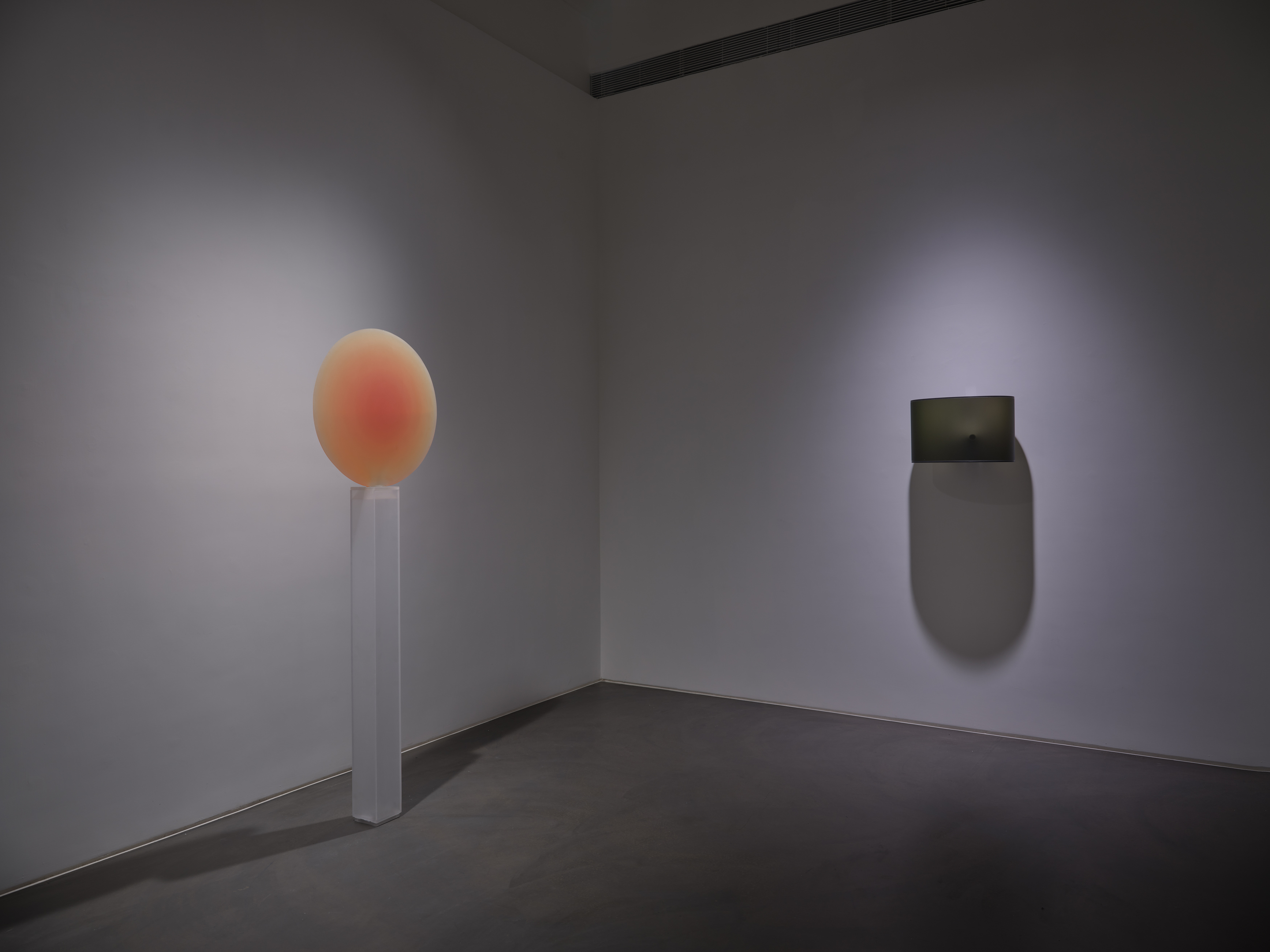 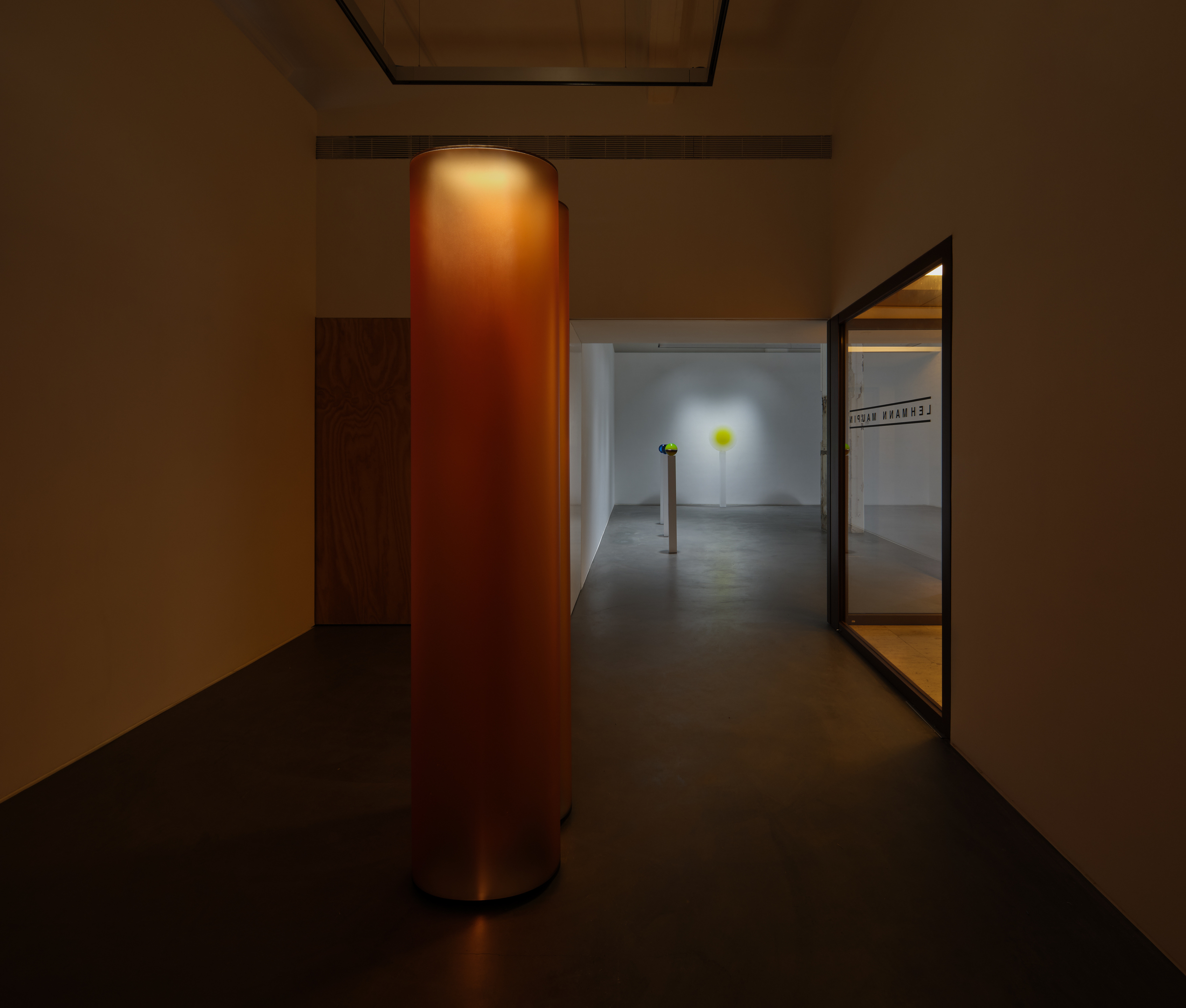 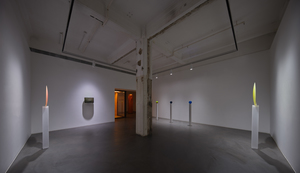 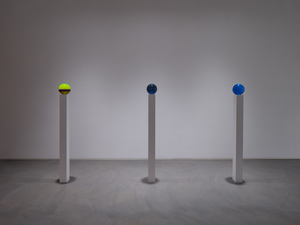 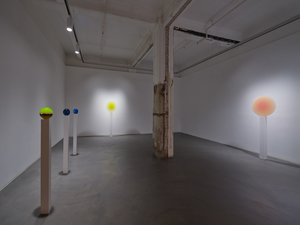 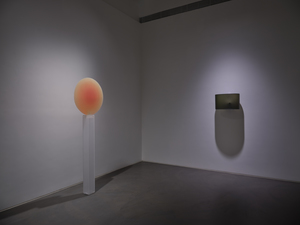 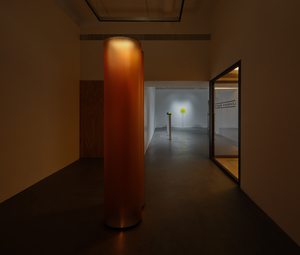 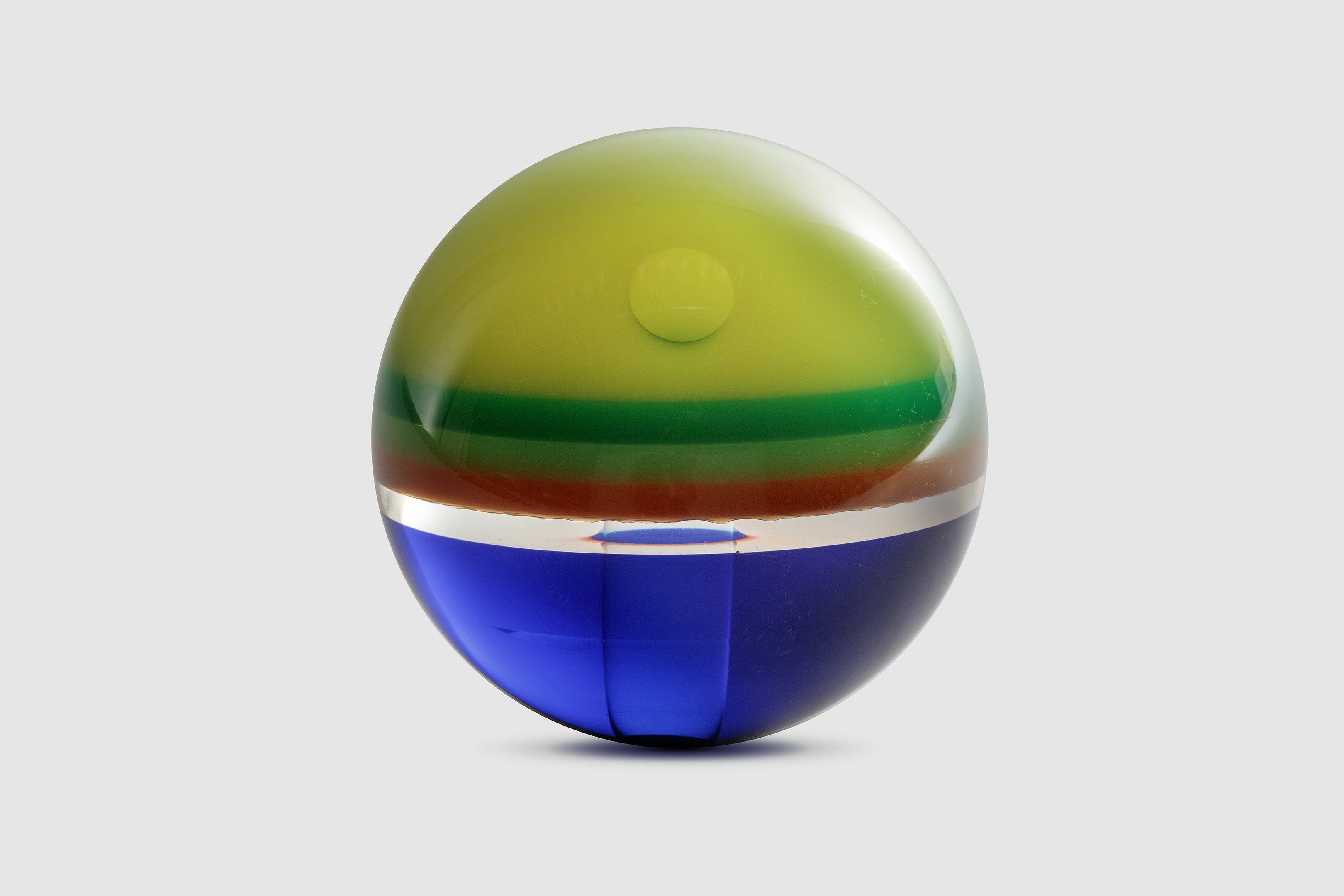 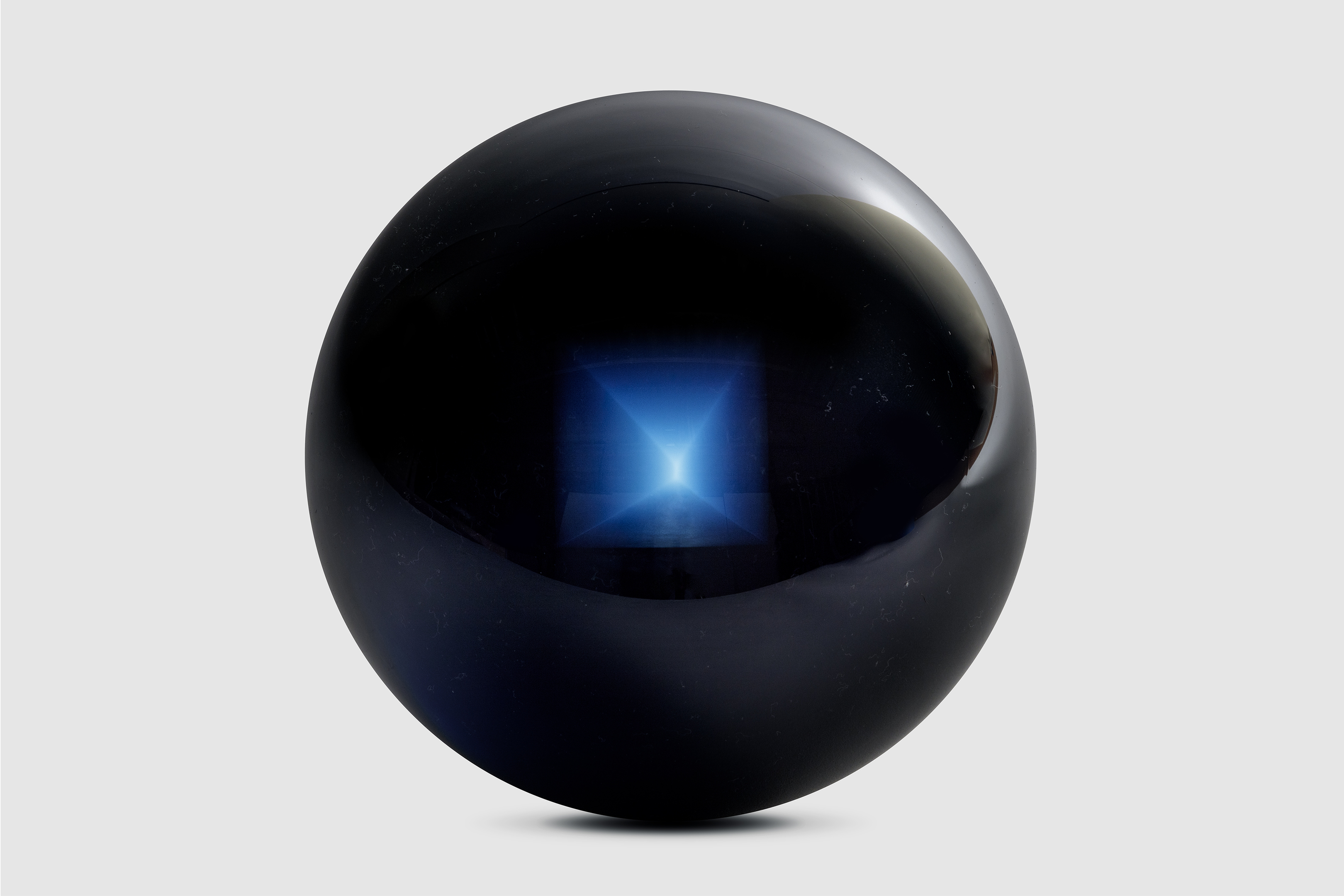 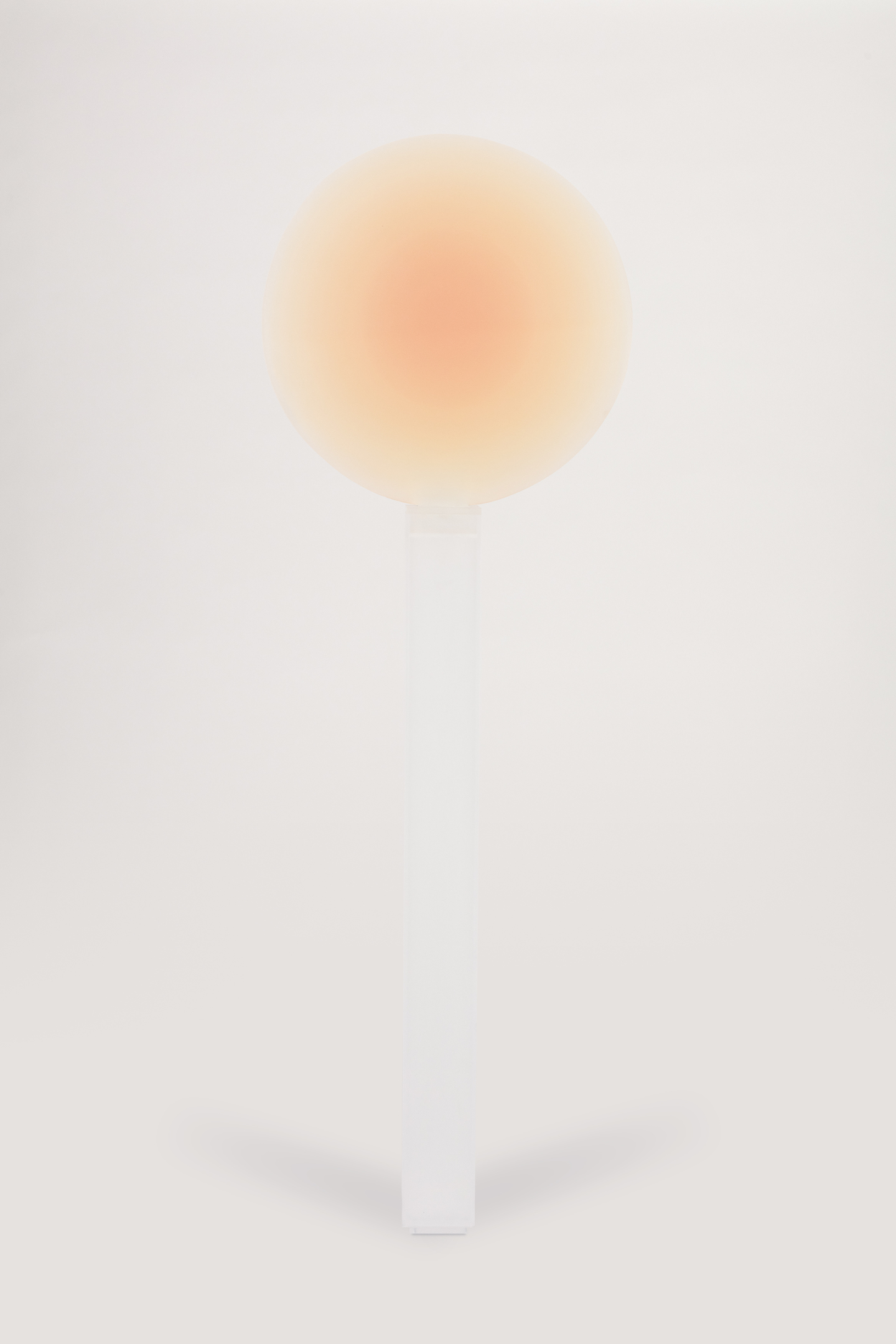 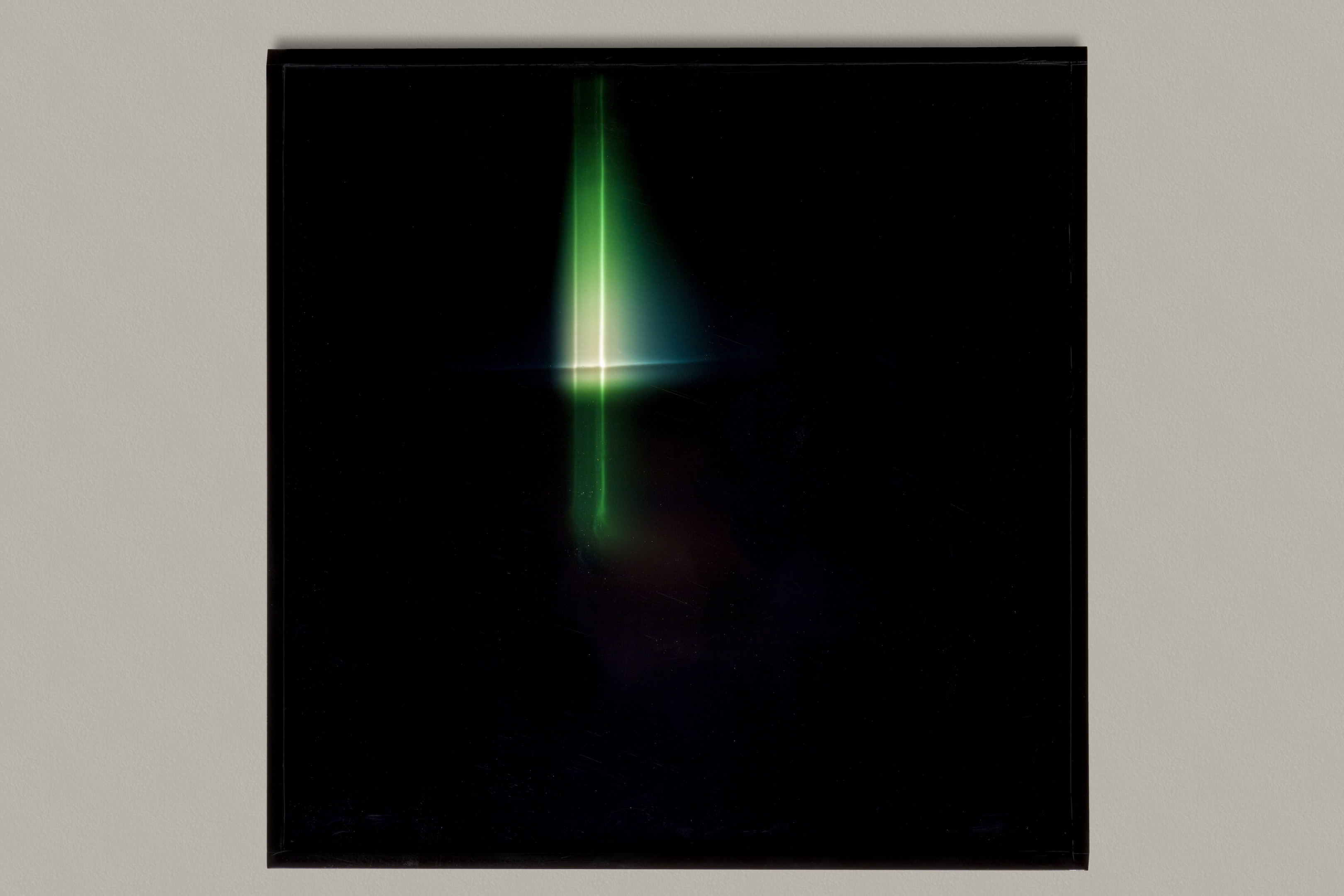 cast epoxy with artist made pedestal 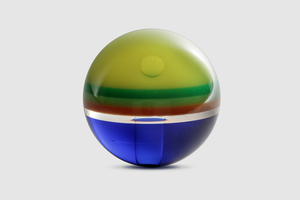 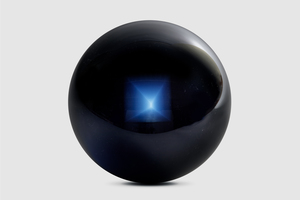 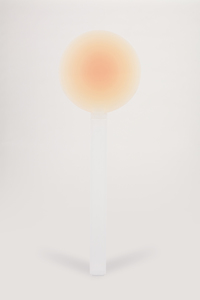 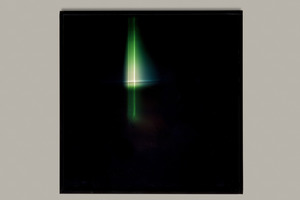