The War Is Not Over Yet

Kim Myungbok (b. 1936) is from a small town in Sinuiju, a city in North Korea. When the Korean War broke out he was fifteen years old and was drafted into the Korean People’s Army. Within a month of becoming a soldier he became a prisoner of war (POW). For the next three years, until the ceasefire agreement was signed, he was interned at various POW prisons in South Korea and at Panmunjeom. At the end of the internment, he refused to be sent back to North Korea; but he also refused to remain in South Korea. Instead, he chose to go to India, a third-party neutral nation. He said he made his choice because he wanted to live. He saw a fellow North Korean prison inmate beaten to death when he said he wanted to go home; he did not want to die. From India he went to Brazil, got married, and became a farm owner. He met Cho Kyeong-duk, an independent filmmaker, in Brazil. Since meeting Kim, Jo has been tracking down and interviewing POWs from the Korean War. When Jo and Kim finally came to Korea together several years ago, Kim had not set foot on the Korean peninsula for over sixty years, and he was now eighty years old; and that is when Kim visited SUH Yongsun in his studio with the filmmaker. After hearing Kim’s story, Suh made a portrait of Kim on the spot. The Third Choice: Kim Myungbok (2015, 2019) was thus born.

Next year will mark the 70th anniversary of the Korean War breakout. There are many more victims of the war, such as Kim, who still cannot go home.

The Korean War is one of the main topics that Suh has been working on steadily over the years. Other historical events include the death of Danjong (1441-1457), the sixth king of Joseon, and the outbreak of the 1894 Donghak Peasant Uprising. His work on Danjong include a landscape painting of the area in Yeongwol, Gangwon Province where the deposed king was exiled and later put to death. On how he became a history painter, he said “I was simply thinking about the contemporary environment in which I was born and raised, and about affairs that either expanded or were connected to that environment.”

Among the historical topics that he has been working on, the Korean War in particular has perhaps the most direct connection to the environment that he (we) find ourselves in.

The War began on June 25th, 1950. After some months of fierce battles it quickly became a war of attrition. The ceasefire agreement was finally signed after three years, and the war is not yet officially over. However, the north and south Koreas have since become two starkly different countries, solidifying the division further in the process. For seventy years, militarism, tension, and ideological antipathy have dominated the Korean peninsula.

The current exhibition Pain, Symptoms, and Signs: The Remaking of History in Suh Yongsun’s Painting (10 October -08 December, 2019) is a portrait of the Korean peninsula where the war is not yet over. The exhibition can be viewed from two perspectives. First, it can be viewed from a historical perspective with reference to well-established public records. Here Suh takes the Japanese colonial rule, the precursor of the war, and the influence of the international balance of power at the time and expands them to apply to the present situation. It covers historical events from the Potsdam talks and Nogun-ri massacre to the more recent Sewol ferry sinking, the candlelight rally, and the president's impeachment. At the end of the Second World War, Korea was liberated from Japan, but Koreans did not own their independence. Thus, the Korean War was in fact a proxy war between the two great Cold War powers that still practically occupied Korea at the time. This historical ideological confrontation is very much an on-going phenomenon in South Korea today. That is to say, the conservatives and liberals, and anti-communists and the “pro-North (jongbuk)”, fight each other incessantly; the confrontation is manifested in the form of the regional conflict and insurmountable communication gap between generations. Suh Yongsun’s paintings are site-specific portraits, connecting the subject to specific historical sites while drawing upon various historical backgrounds both general and specific.

Second, the current exhibition can be viewed from the perspective of the artist’s personal memories. Suh was born in Seoul in 1951, immediately after the outbreak of the war, and spent his childhood in the Miari and Jeongneung neighborhoods. “The elementary school I went to was built in Miari Cemetery. A big pile of bones were gathered in the middle of the school yard and put to one side. One can’t imagine it now. The front mountain here was a huge cemetery. They cleaned it all up… and I saw the whole process. They were in a hurry, so they would only scrape the flesh off the bones. I saw it all as a child. [Later] I saw a shantytown spring up there.” He told of this childhood memory in his studio. As an artist, the point of departure for telling about the Korean War is his personal experience of the war, what he and his family went through after the outbreak of the war. The story then expands to include interviews he conducted with people, such as Kim Myungbok, who also personally experienced the war. He has painted the poverty and the horrifying environment in which he grew up, the young POWs, mothers who have lost sons, and soldiers shooting guns.

The story in Pain, Symptoms, and Signs… begins with the Korean War. However, the story also contains the living people and living sites of today that are witnesses to the history. The current exhibition largely portrays the Korean War and the before and after of this major historical event. However, it also tells personal stories and focuses on specific individuals, incidents, and landscape, thus making multi-layered history reading possible.

Installation view of Pain, Symptoms, and Signs: The Remaking of History in Suh Yongsun's Painting 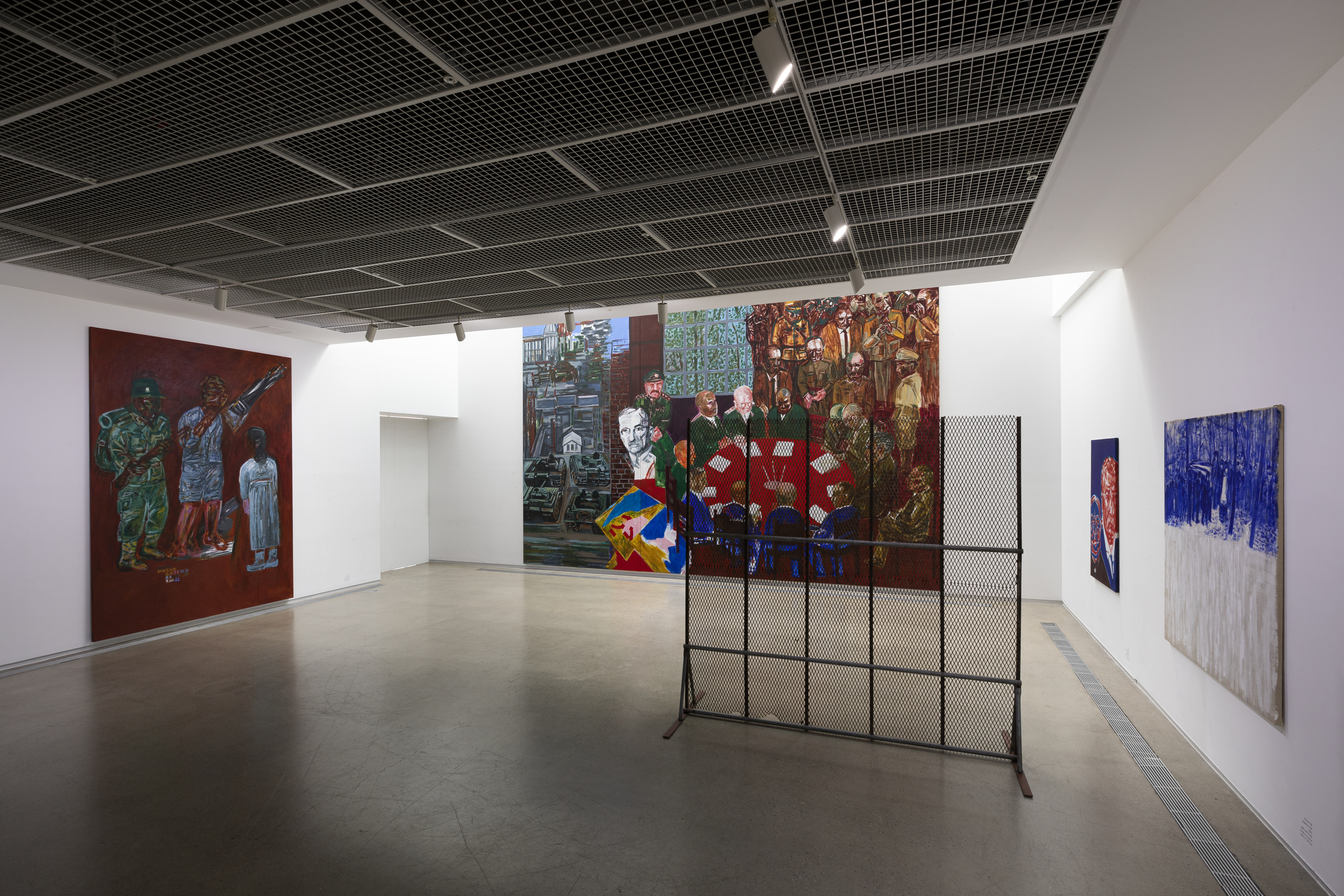 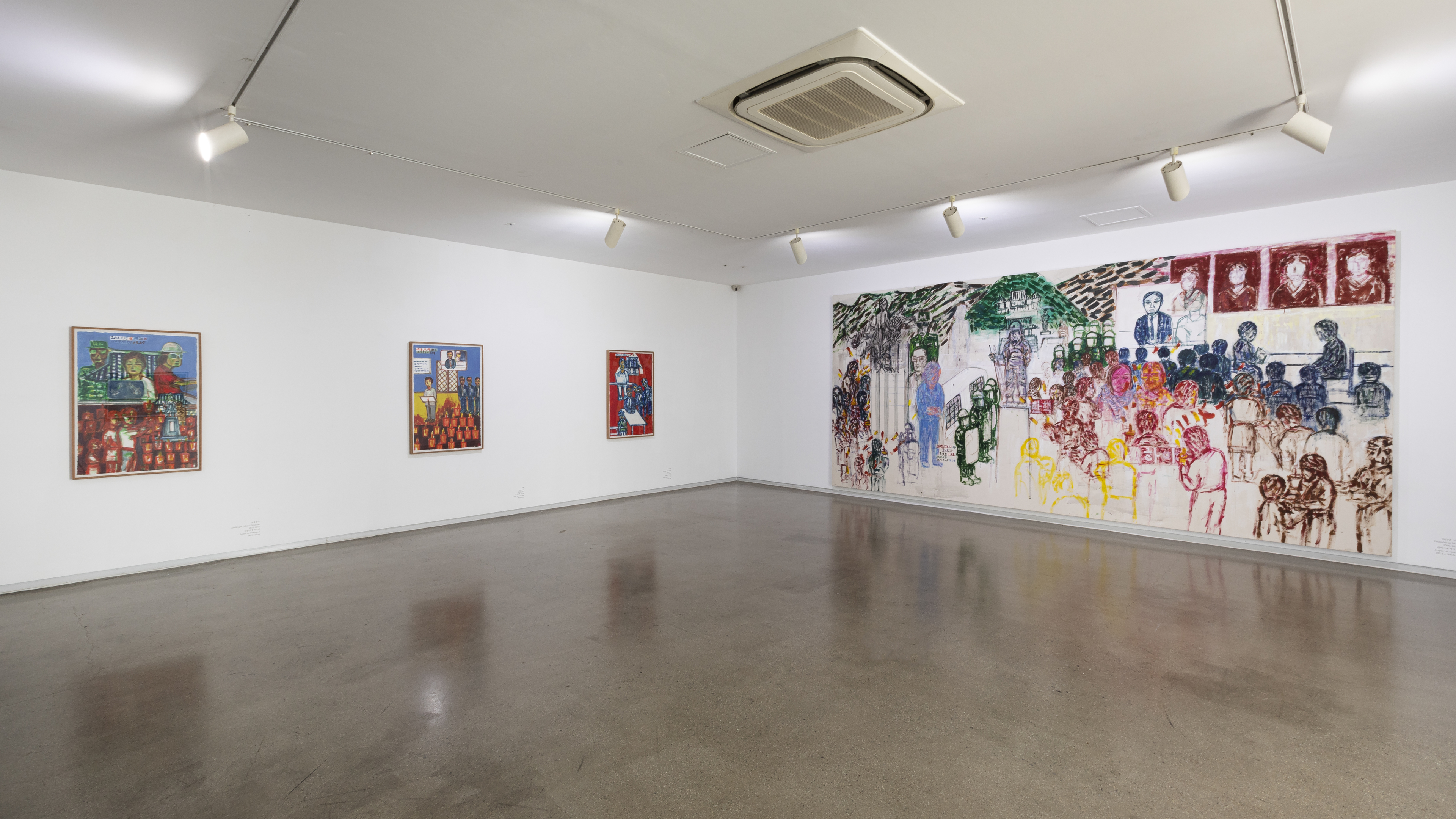 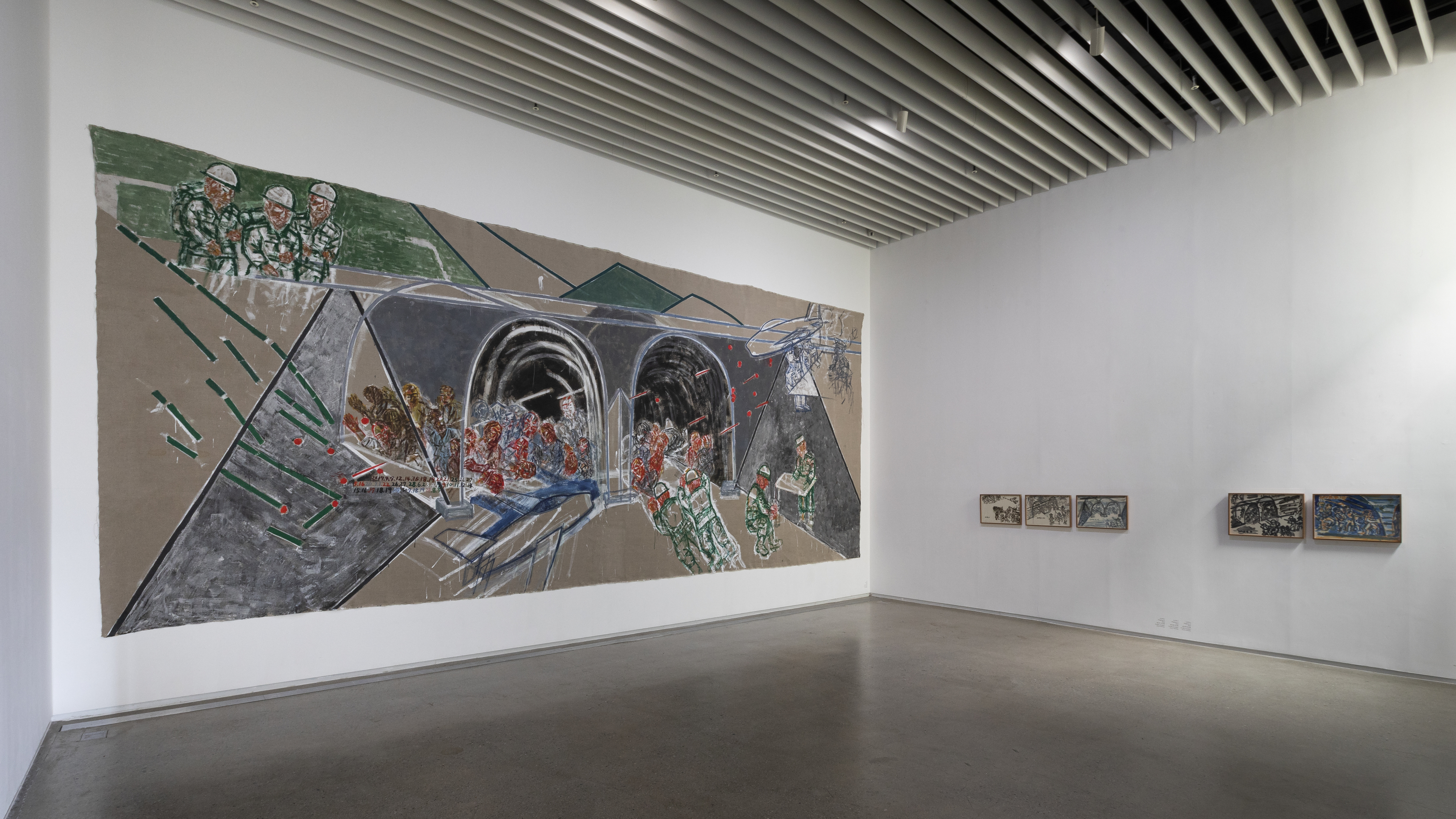 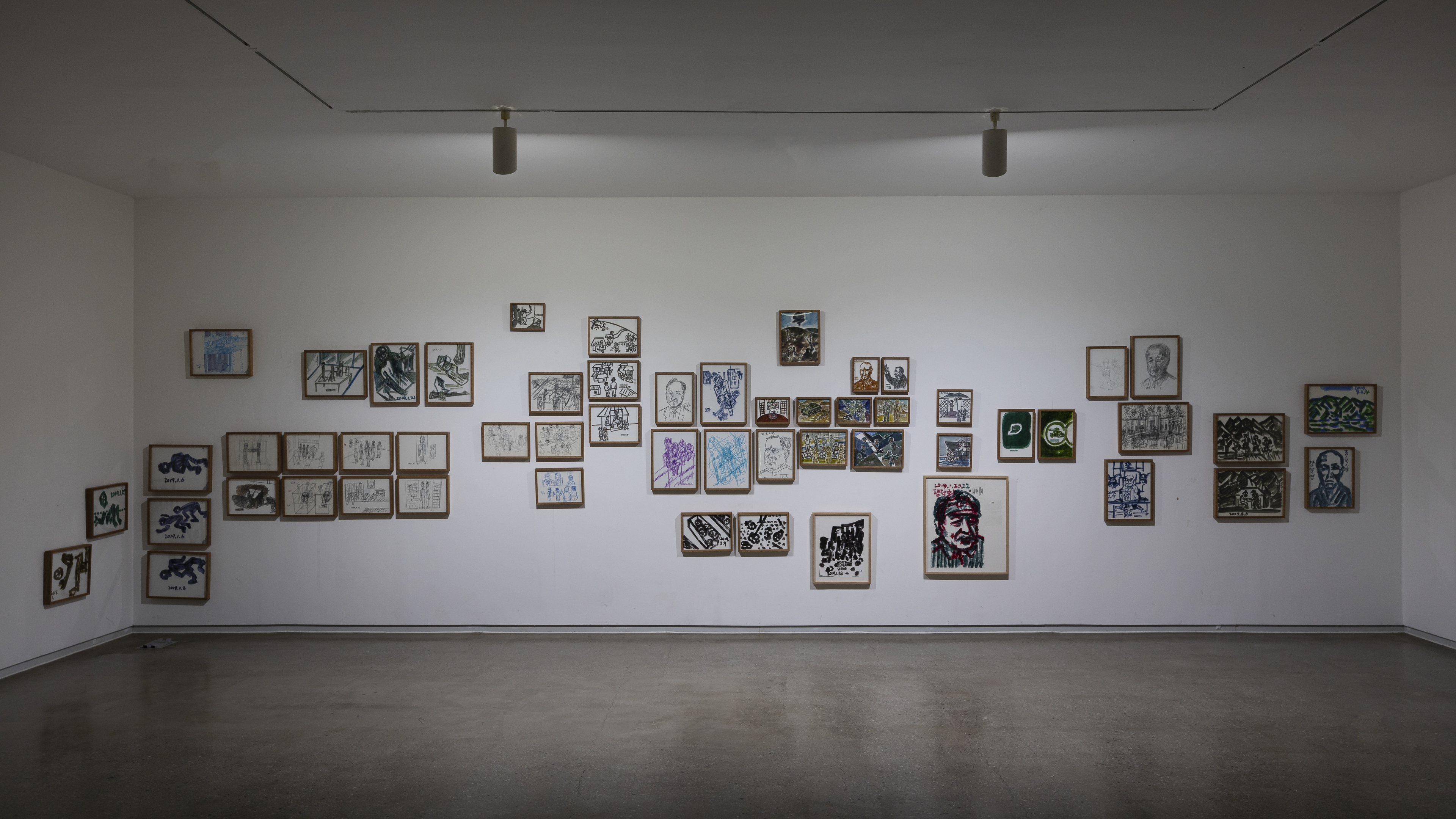 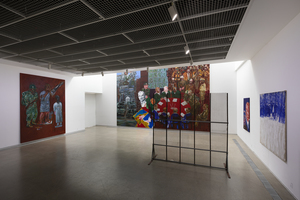 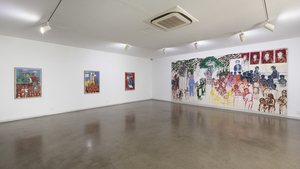 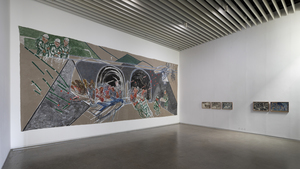 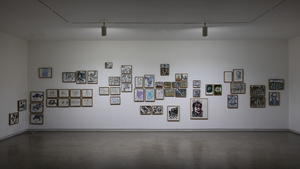 Installation view of Pain, Symptoms, and Signs: The Remaking of History in Suh Yongsun's Painting

These Times Are Racing