There’s something about being held within the form, like the actual person, the life cast, is held within the fantasy of the form. It’s a piece that draws you in. You go around the back, you come to the front... – Excerpt from artist interview

Kukje Gallery is pleased to announce Cut Up and Silicone, Female Idol, WS, a solo exhibition of new work by Paul McCarthy from September 14 to October 29, 2017. This is the artist’s second showing at Kukje Gallery following his acclaimed exhibition Paul McCarthy: nine dwarves in 2012.

Paul McCarthy occupies a critically important place in contemporary art. For more than four decades his work has repeatedly challenged audiences to confront popular myths and wrestle with the psychological undercurrents of capitalism. His work is both generous and confrontational; meticulously conceived and crafted no matter what medium he uses, his complex, often overlapping projects have come to define the zeitgeist of postmodern visual art. Exploiting genres as diverse as sculpture, performance, film, and photography, McCarthy has invented an entirely new category of art making—a mash-up of mass media and cultural fantasia that is at once universal and deeply personal.

This balance of American culture and psychology is the underlying theme of this show that continues the artist’s exploration of myth, folklore, and popular iconography including familiar fairy tales such as Snow White. Made famous by Walt Disney’s beloved 1937 animated classic film Snow White and the Seven Dwarfs, the role of the innocent princess has served as a cipher for McCarthy’s exploration of how media commercializes desire. This is best illustrated by the countless kitsch objects that have been created over the past century to market the fairy tale—objects the artist uses. McCarthy has appropriated these ubiquitous figurines, altering their scale and fragmenting them in both heroic and abject ways. In repeatedly co-opting familiar tropes of normative social values, McCarthy confronts the way our identity is constructed, often subconsciously.

One of the unique ways the artist works is to recycle and reclaim aspects of his fabrication process as a means of creating new and unpredictable sculptures. He has likened these works to “spin-offs,” alluding both to their material evolution and the popular term in Hollywood for cross-marketing entertainment products. In the case of Snow White, McCarthy has created numerous intersecting bodies of works including video, installation, and sculpture under the title White Snow (WS). For this exhibition, McCarthy will include two versions of White Snow’s head in silicone. In addition, he has begun using a component of the casting process known as the “core” as another parallel body of work. Typically hidden from view within the sculpture itself, the artist began using the core as a “spin-off,” presenting an unsettling vision of what lies beneath or within the fictional characters—in effect, presenting the interior space of popular myths. Installed in the K2 space, the artist will show two versions of White Snow Head, one in white- (2012-3) and the other in flesh- (2012) colored silicone. These will be shown alongside two versions of White Snow Head Core, also in white- (2013-5) and flesh- (2013-7) colored silicone.

McCarthy’s strategy of using the core has been employed in a complex and ambitious new sculptural series inspired by a painting by the French artist Francis Picabia (1879-1953) titled Woman with Idol (1940–3). Shown in Kukje Gallery for the first time, this multi-leveled work was influenced by McCarthy’s career-long fascination with Picabia and the painting in particular, in which an erotic female figure embraces a giant pagan idol. Appropriating the idol in much the same way as a Disney character, McCarthy has made numerous works using the figure, rendering a two-dimensional phantasm into a three-dimensional body for examination. Each is related to the other in that they reflect a process of casting done in progressive stages. There is an original Picabia Idol and then there are cores that are taken one from the other—the first being the Picabia Idol Core and the second being the Picabia Idol Core Core—all cast in silicone. In the original rendition the artist added greater depth to the original subject and details not depicted by Picabia in his painting. In the progressive cores the fabrication reveals vertical and horizontal cuts that are all part of the process. Each subsequent core of the Picabia Idol sculpture reflects this technique, growing increasingly gaunt and winnowed with each iteration. In this way, McCarthy acknowledges how processes designed to attain verisimilitude contain innate abstractions and symbolic meaning such as in negative or interior spaces. In rendering different stages of this archetypal fetish, the artist has created a potent reflection on desire, the primitive, and the supernatural while playfully engaging Picabia, one of 20th century’s greatest and most enigmatic artists.

In another never-before-seen series of sculptures exhibited in the K3 space titled Cut Ups, McCarthy has used a 3D-scanner to map an existing cast of his own naked body and once again casts it in high-density urethane resin. Cutting and reassembling these detailed scans, McCarthy again confronts the way form consists of both external and internal structures. By exploiting prototyping processes and casting technology, the artist is able to create hyper-real, life-sized sculptures that teeter between fun-house horror and classical statuary. Similarly, in cutting and revealing the material embodiment of the human figure, McCarthy points to the ritual function of sculpture and as well as the more mundane omnipresence of mass-produced objects.

In addition to the striking and uncompromisingly beautiful Cut Up series, the artist has also produced a suite of life-sized inkjet prints made using the same digital scans. The subtle gray and blue prints depict the artist’s body as a 3D model, presenting every inch of flesh with clinical precision. Perversely alluding back to commercial manufacturing, the digital depictions evoke a kind of autopsy or, conversely, the design for a mass-marketed figurine. Aggressively confronting the “high” design factor implied in such a schematic depiction, McCarthy has covered the prints with thick layers of paint as well as large loosely scrawled words such as “DEATH,” “PENIS FACE,” and “CUT UP.” Often overlapping one another and illegible, these dense gestural blocks of messy color and enigmatic graffiti seem to suggest a post-mortem or psychological profile. Indeed, the series of violently transfigured portraits, when seen together, suggests a kind of allegorical gestalt, outlining the many stages of a protagonist both burdened and liberated by his body. In this way, the Cut Up paintings function as a kind of classical chorus, framing the many ways Paul McCarthy examines the function and psychology of art in our age. 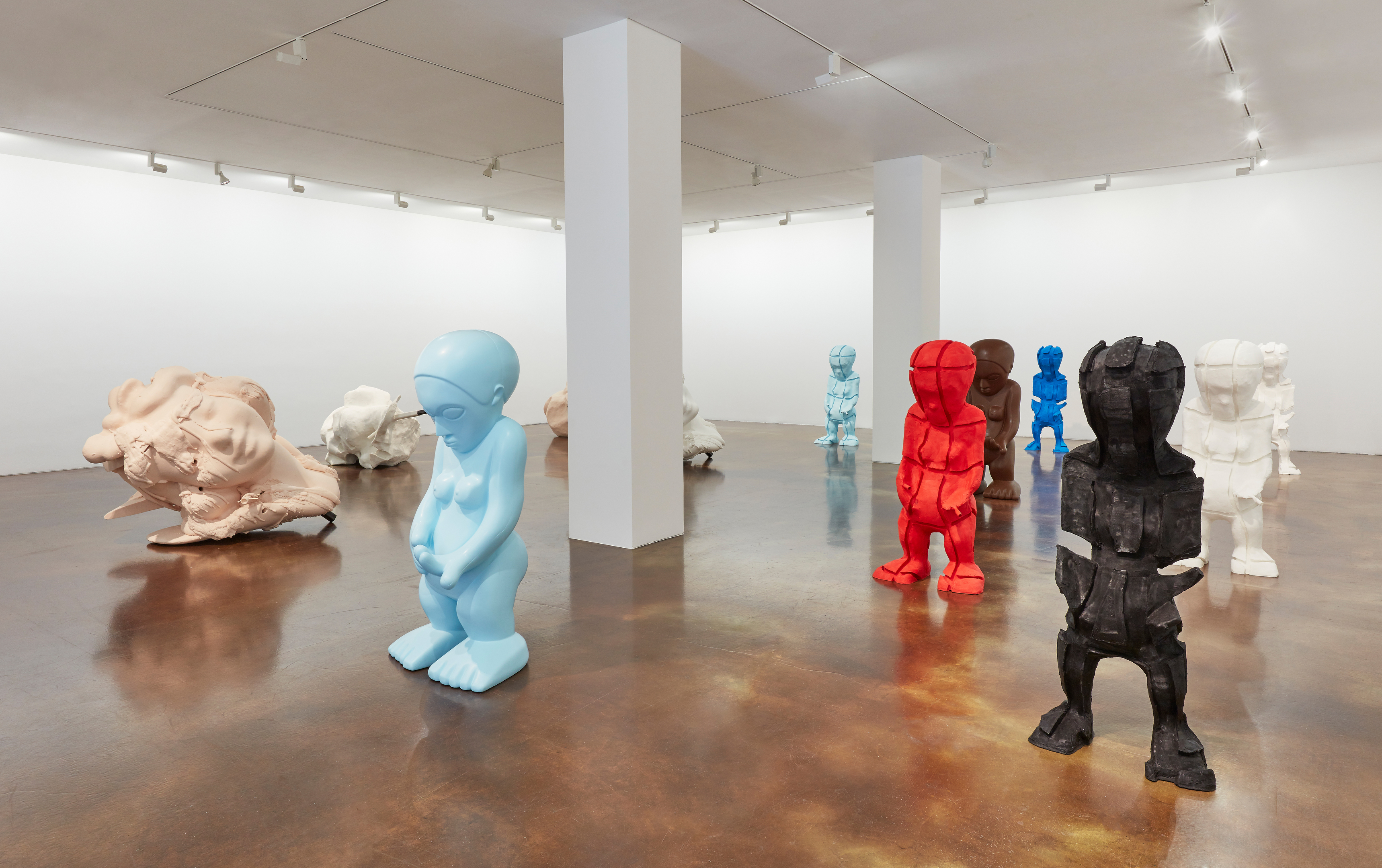 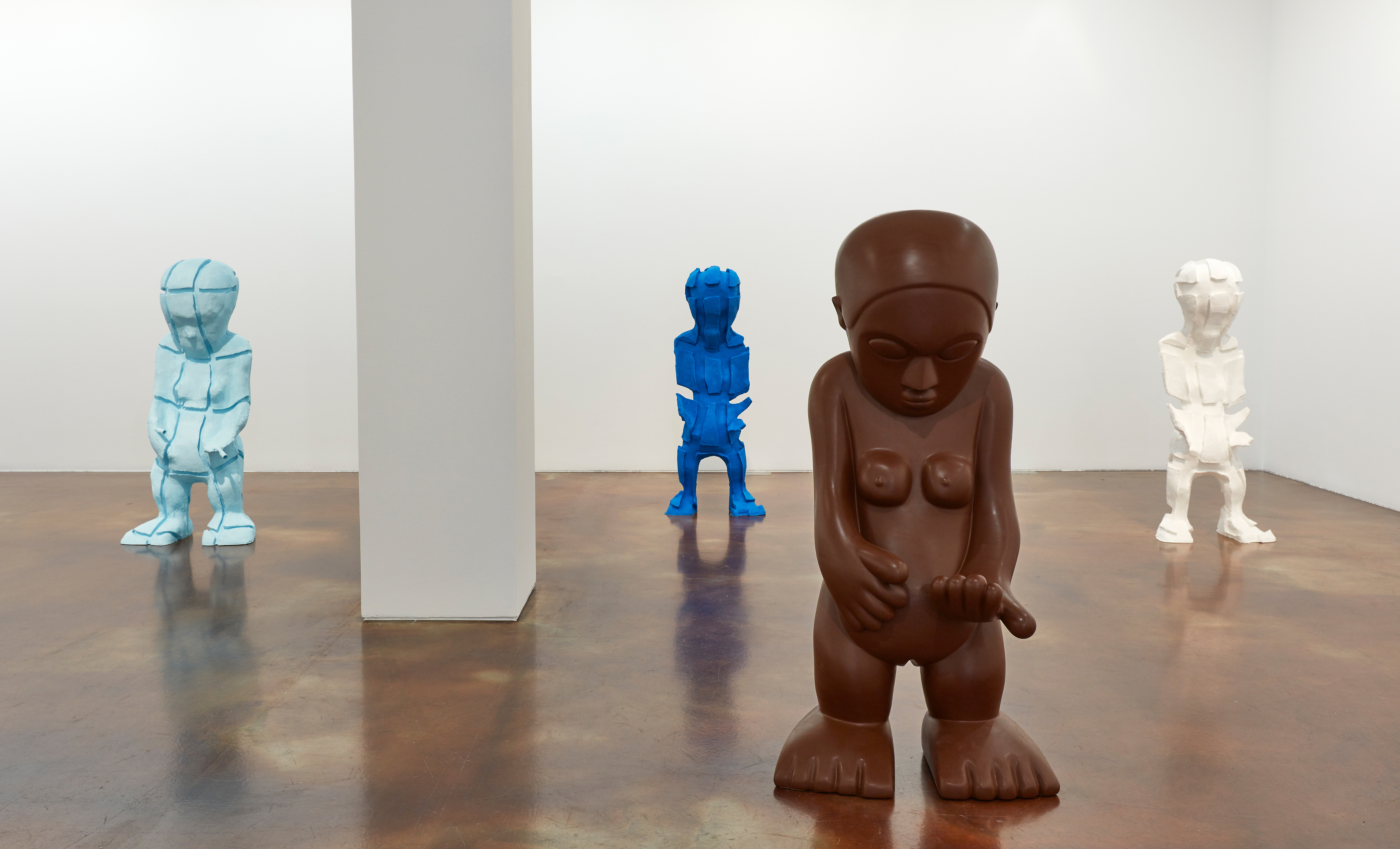 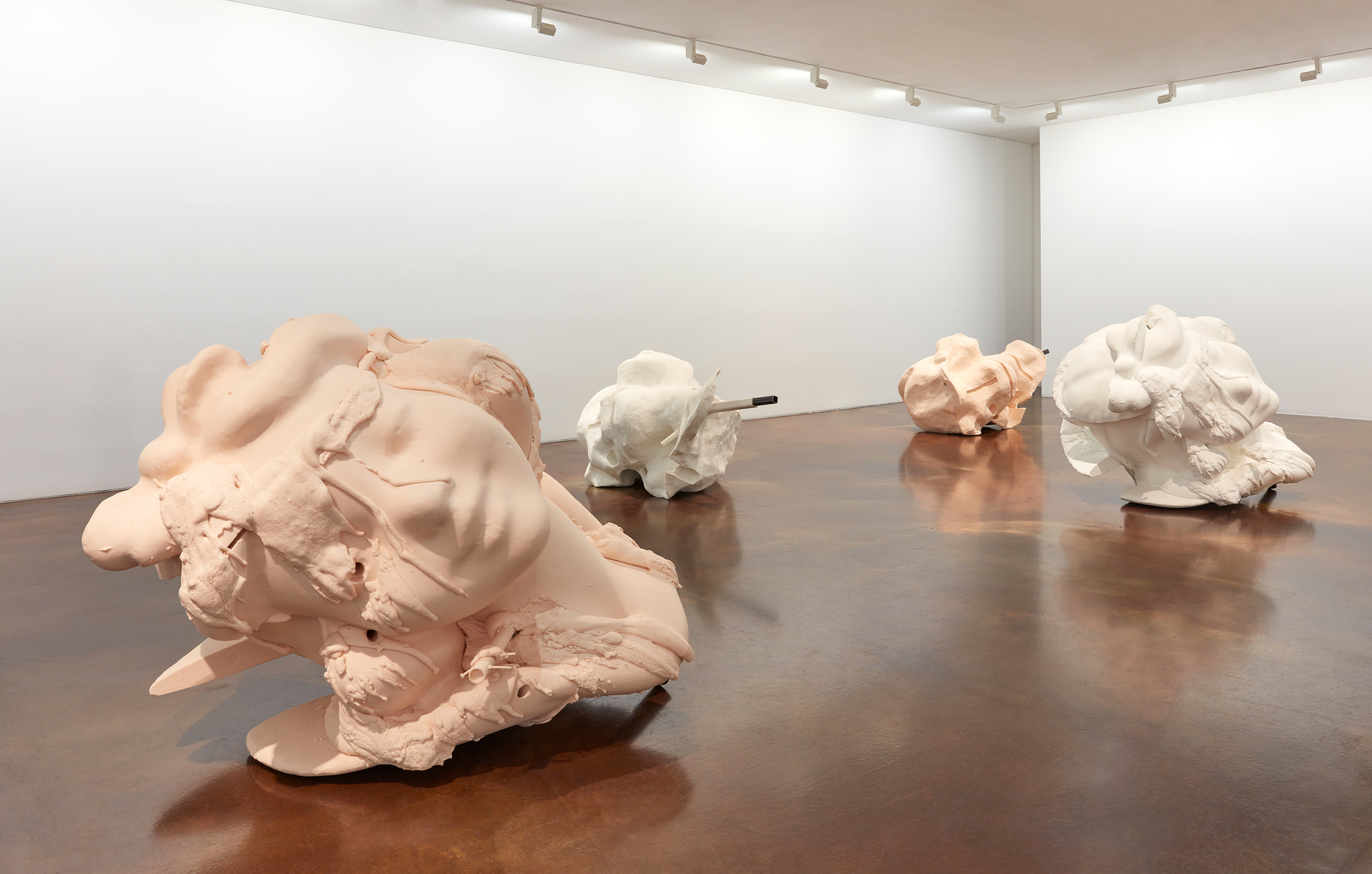 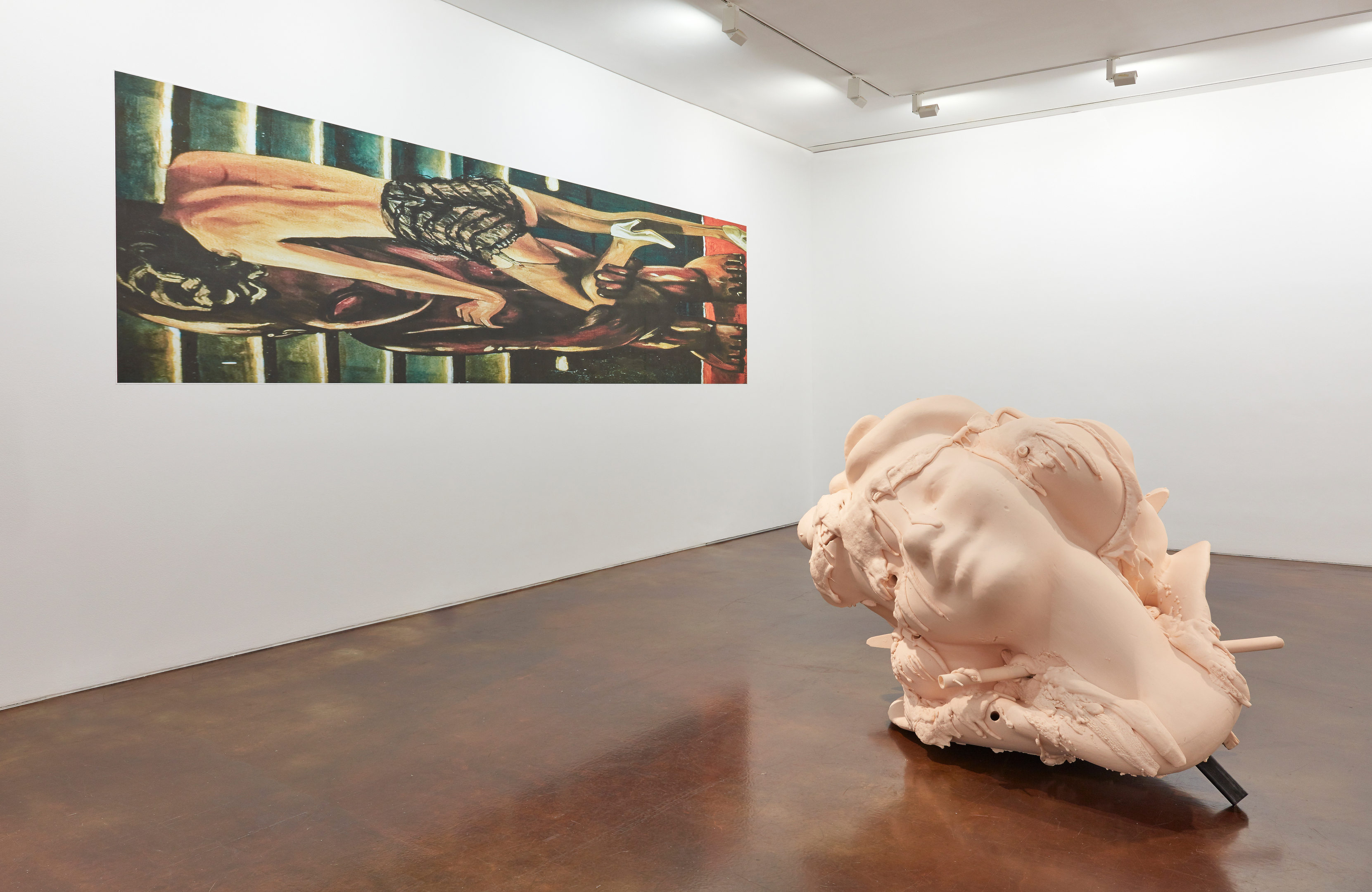 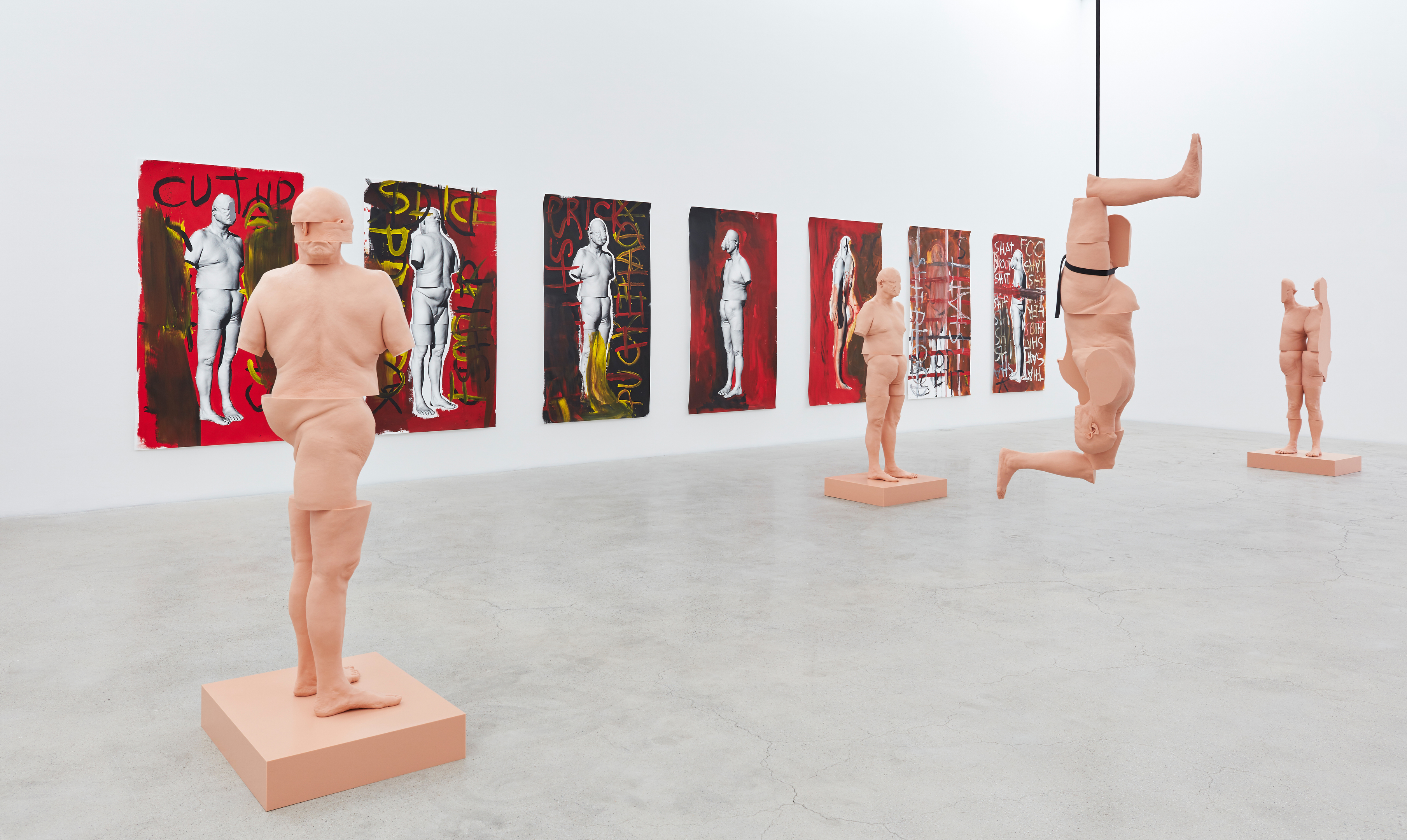 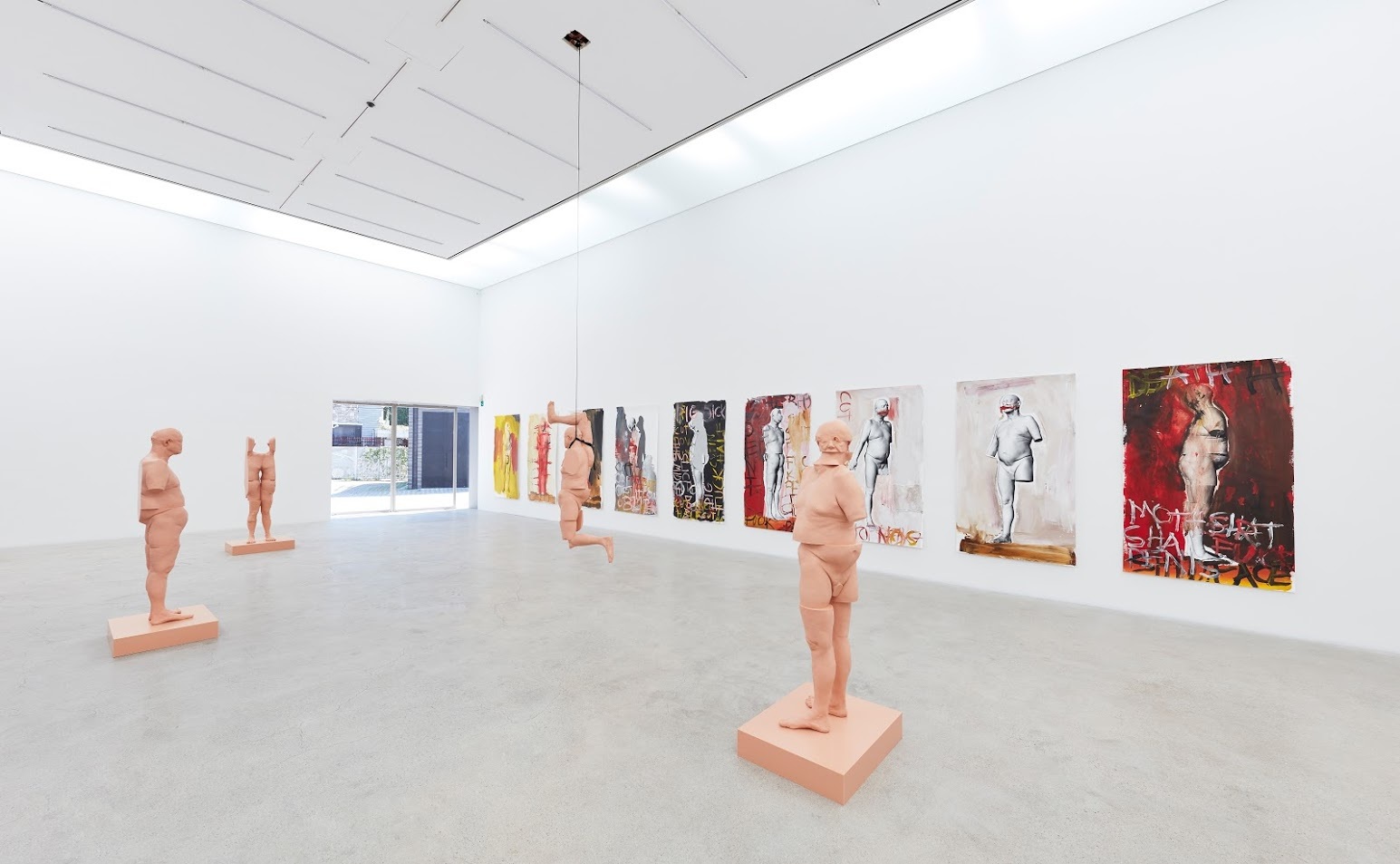 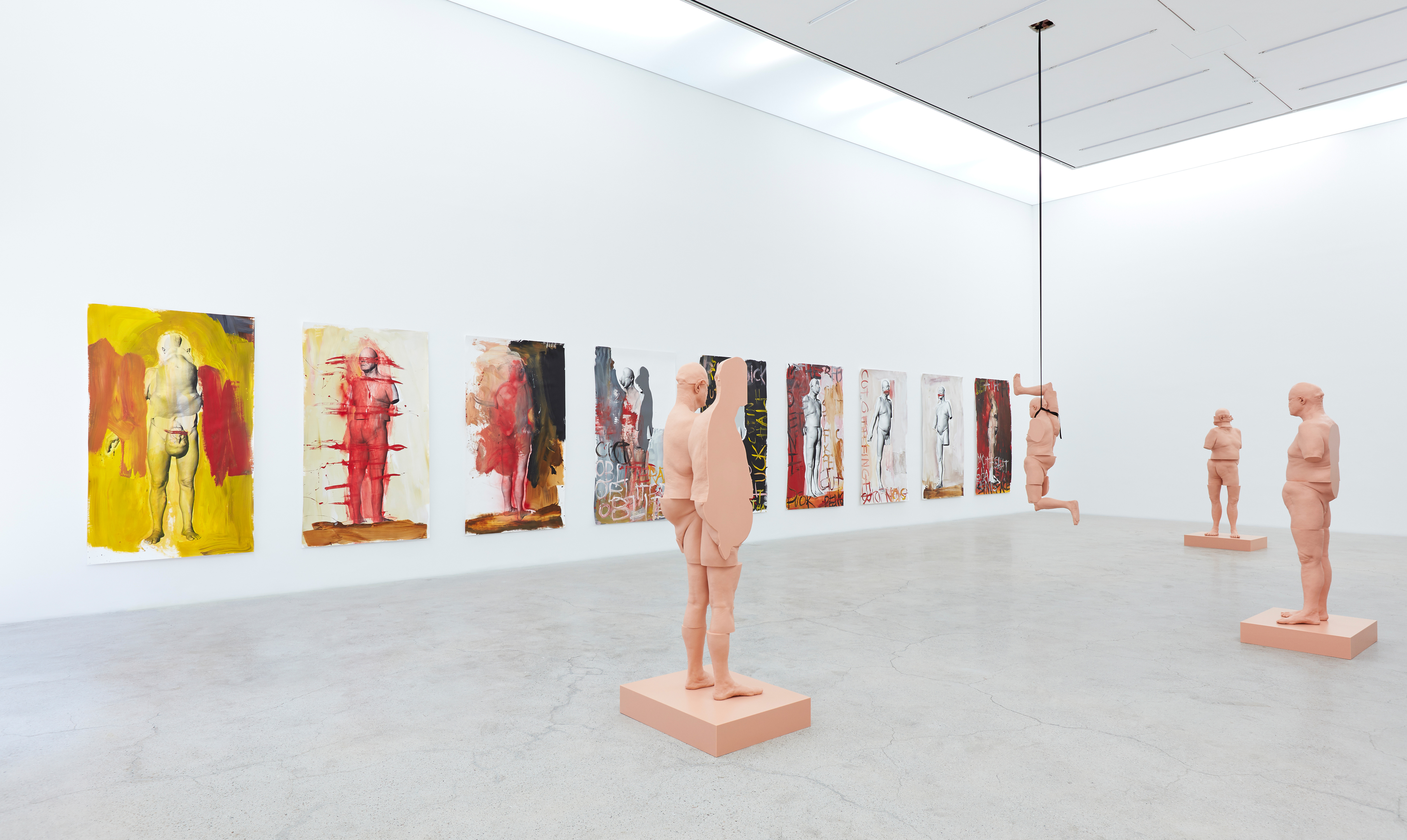 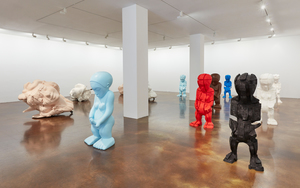 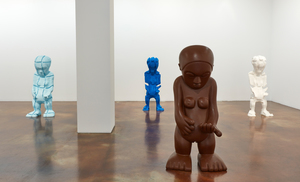 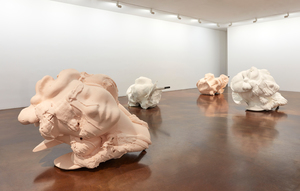 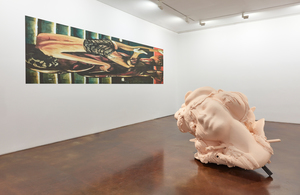 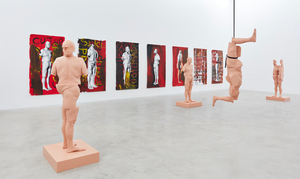 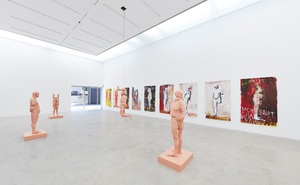 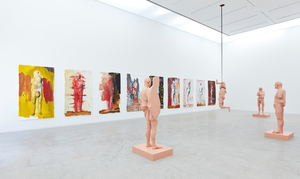 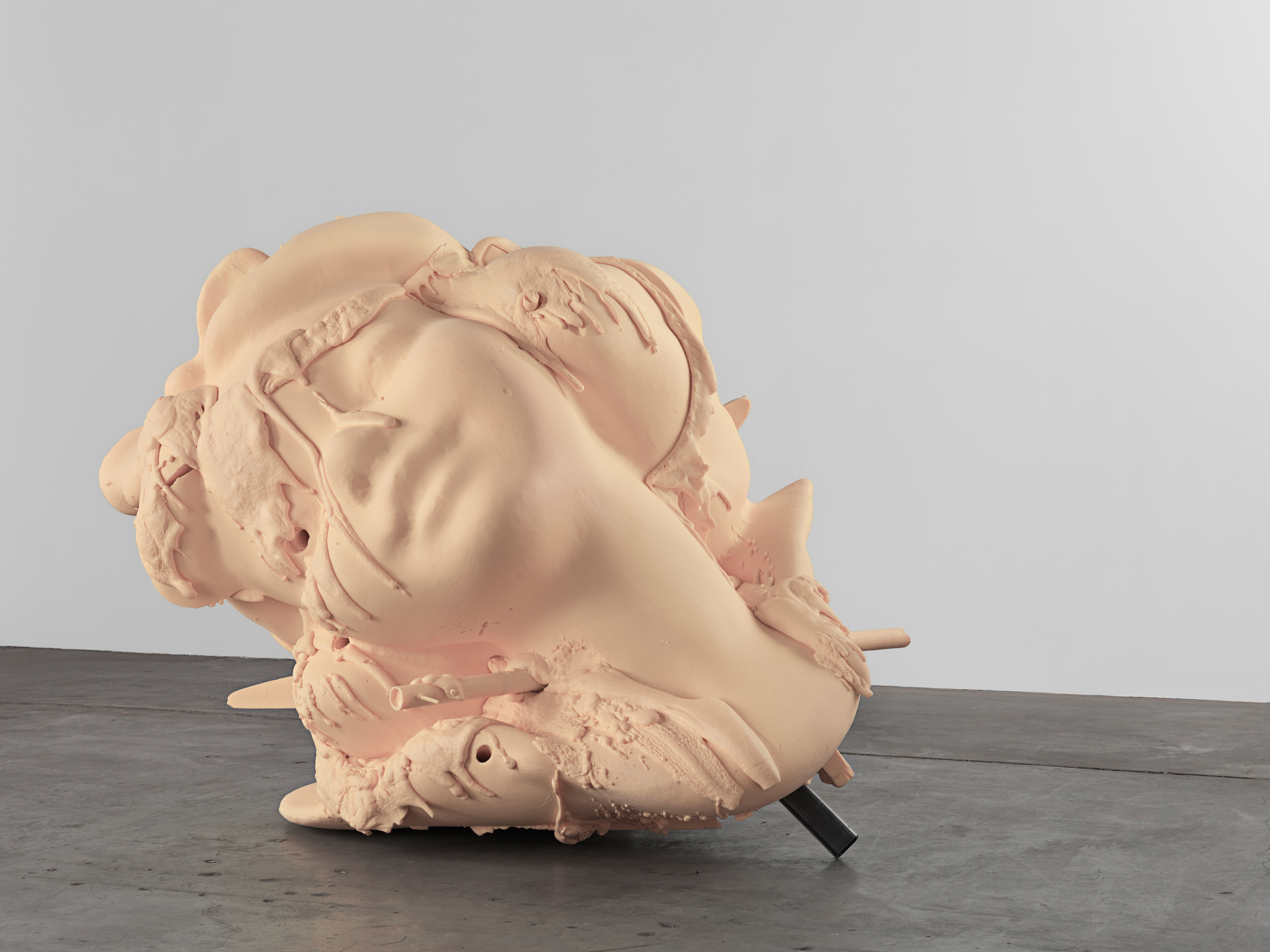 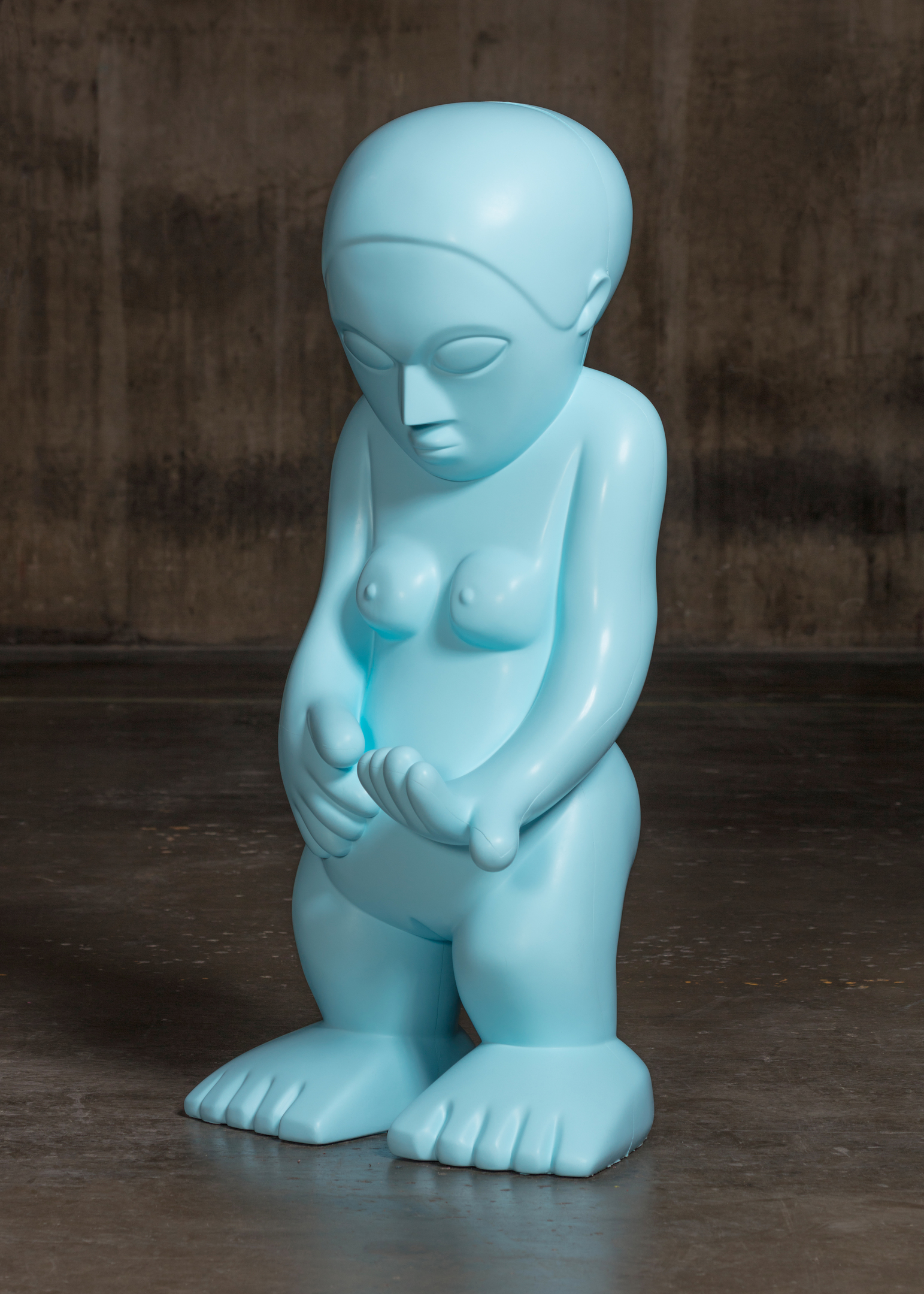 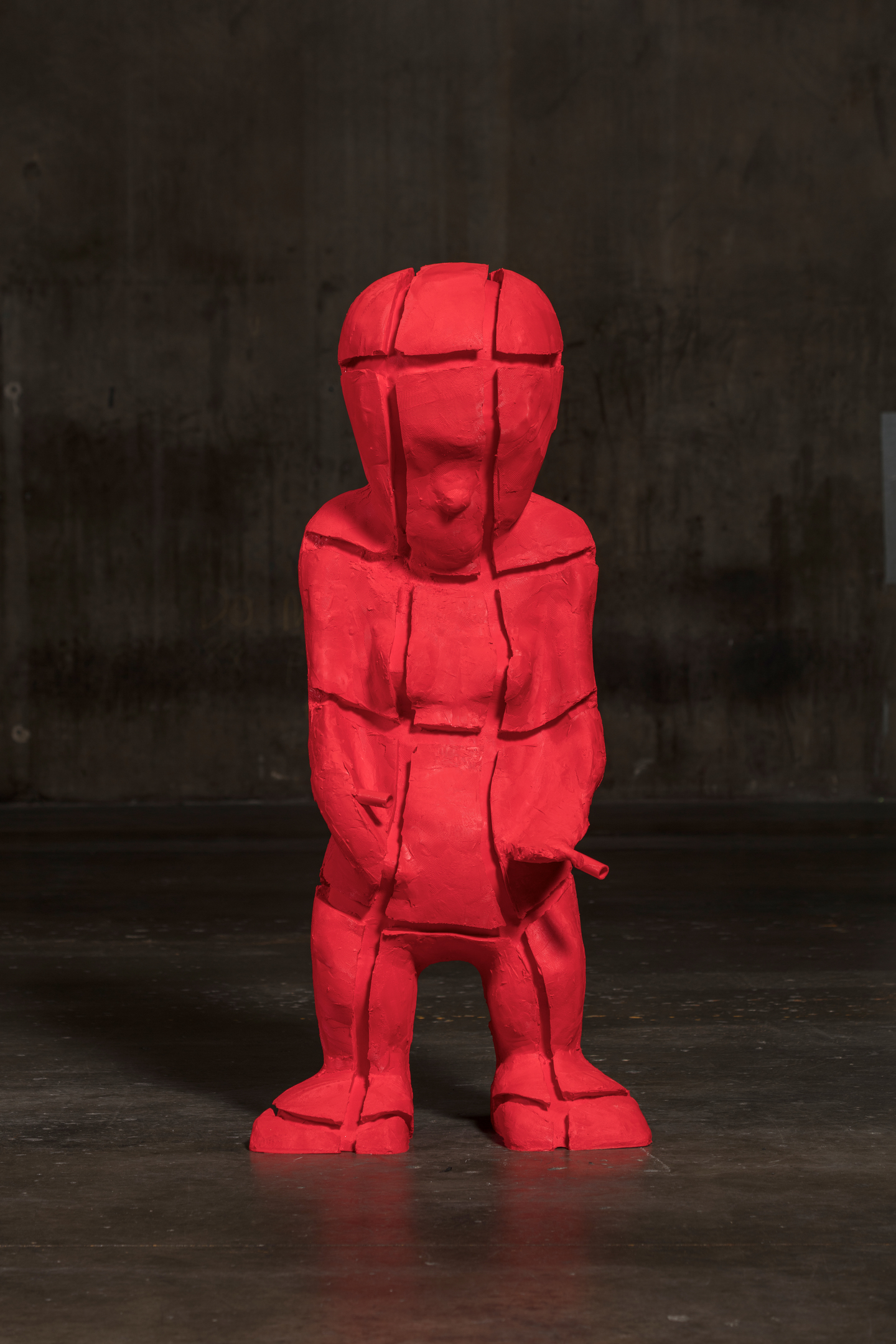 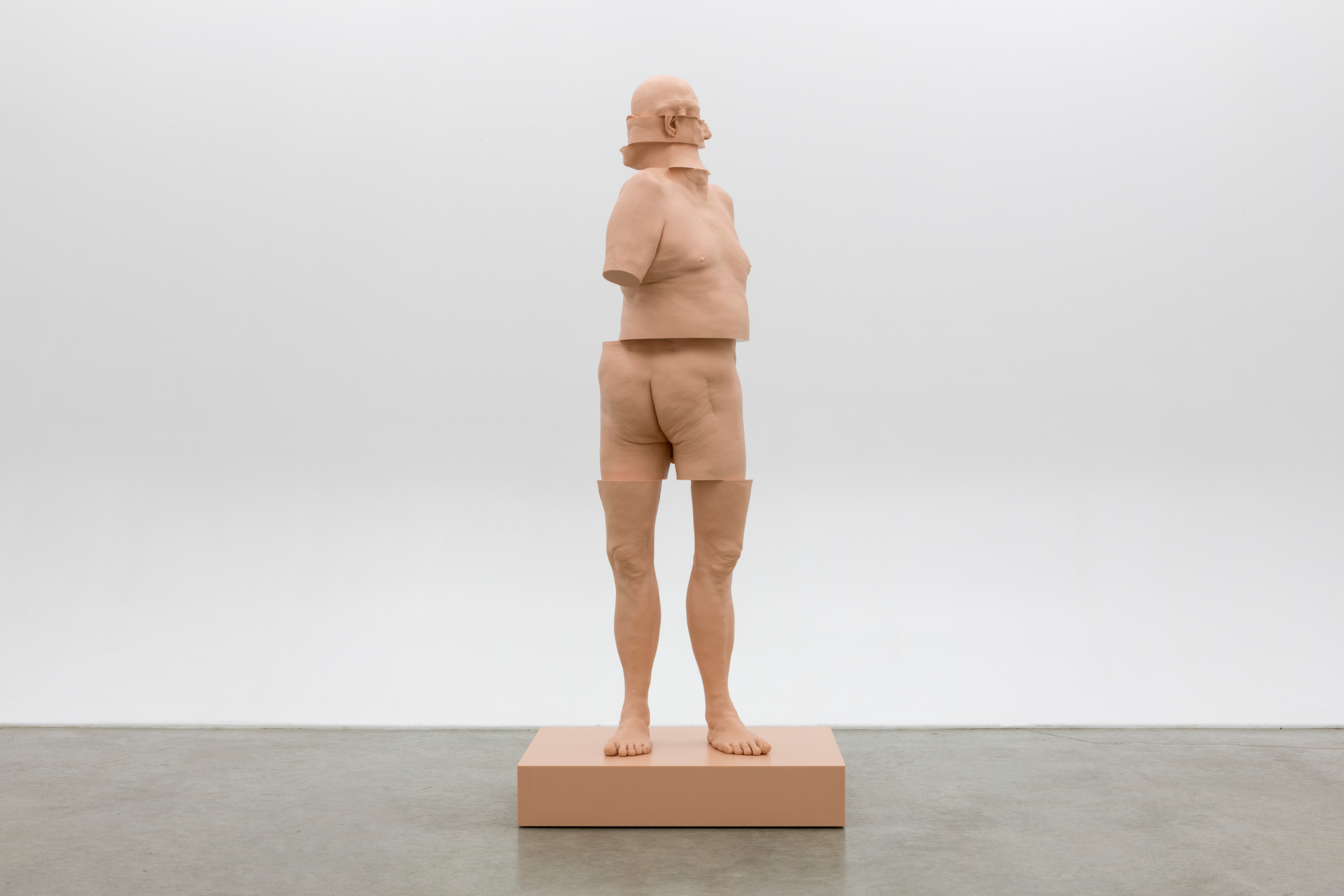 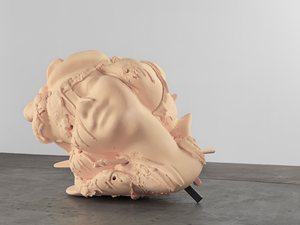 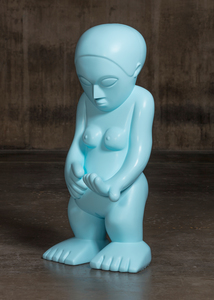 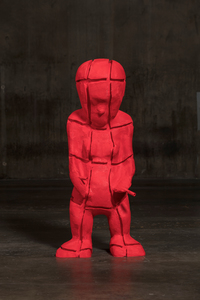 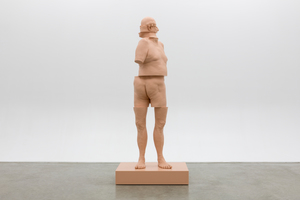 The Contemporary Art Stage I: The Essence of the Age